Harry Kane's first international goal in 16 months helped England on their way to a comfortable victory in Albania as World Cup qualification continued without a hitch for Gareth Southgate’s side.

Having kicked off the road to Qatar with a straightforward 5-0 triumph against San Marino, England headed to Tirana for their final match on foreign soil before what they hope will be a Euro 2020 last-16 tie.

England overcame a sluggish start as Kane scored his first international goal since November 2019, while  Mason Mount wrapped up the win that sees them take control Group I ahead of Poland’s visit.

Luke Shaw was among six changes for Sunday's qualifier and marked his first appearance since September 2018 with a fine cross that Kane expertly headed home towards the end of a drab first half.

The England skipper rattled the crossbar soon after and Phil Foden saw an effort tipped onto the post in the early stages of the second half.

Southgate’s men settled the contest in the 63rd minute as Kane put through Mount to superbly curl home as the visitors capitalised on a poor error by Albania defender Berat Djimsiti.

This encounter was exactly 20 years on from England’s last match in Albania, where the hosts made life uncomfortable during the opening exchanges.

Edoardo Reja’s organised and hungry side forced a 13th-minute mistake that they should have done better from. Mount’s wayward pass was picked off and Albania broke, but Myrto Uzuni poorly blazed over Nick Pope’s goal from the edge of the box. 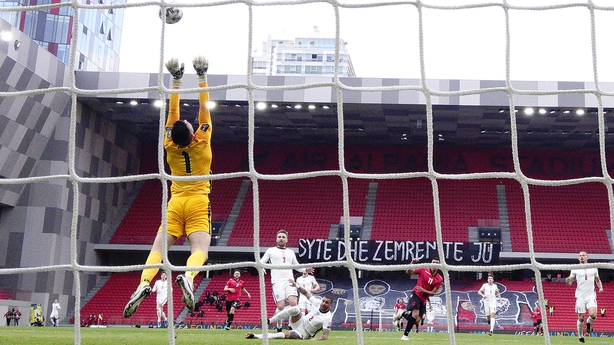 John Stones, making his second international start in a matter of days, had headed from a corner shortly before that warning shot for an England side struggling to build play on the stodgy Air Albania Stadium pitch.

But Southgate’s men always had the quality to hurt the side 66th in the world rankings and pulled ahead in the 38th minute.

Returning Shaw curled over a fine first-time cross from the left that Kane stretched to meet with a superb header that found the bottom right-hand corner.

England nearly added another within four minutes. Raheem Sterling bent over a lovely right-footed cross from the same area, with Kane getting ahead of Hysen Memolla at the far post and striking off the crossbar.

Neither side made half-time changes and Southgate’s men returned on the front foot, hitting the woodwork again in the 52nd minute.

Sterling kept his cool under pressure and laid back for Manchester City team-mate Foden to hit a low left-footed shot that Albania goalkeeper Etrit Berisha tipped onto the post.

Walker saw a fizzing cross cleared and Kane mishit an effort from a corner as England looked to put the match to bed, which they managed to do in the 63rd minute.

Djimsiti’s attempted pass out from the back only succeeded in finding Sterling, who prodded the ball onto Kane. The England skipper played a lovely ball through to Mount and the Chelsea midfielder coolly curled home.

Kane was bemused to be booked when challenging Albania’s defence to turn home from close range and would see a shot deflect wide in stoppage time.

But the match had long since petered out on a night when Pope did not have to deal with a serious threat on goal.