Manchester United Women celebrated their first match at Old Trafford with a valuable 2-0 victory over West Ham in the Women's Super League.

It was a historic first as Casey Stoney's side left their usual home at Leigh Sports Village, taking advantage of the men's international break.

A first match with fans will have to wait, while Stoney was frustrated that the game was not given a wider TV audience, with rights issues meaning it could only be shown on the Football Association's streaming platform.

United seemed to be playing the occasion in a nervy first half but made the breakthrough with two goals early in the second half from Lauren James and Christen Press.

Three defeats in their previous four games had hurt United's Champions League chances and anything but a victory against the league's bottom side would have been a huge blow. 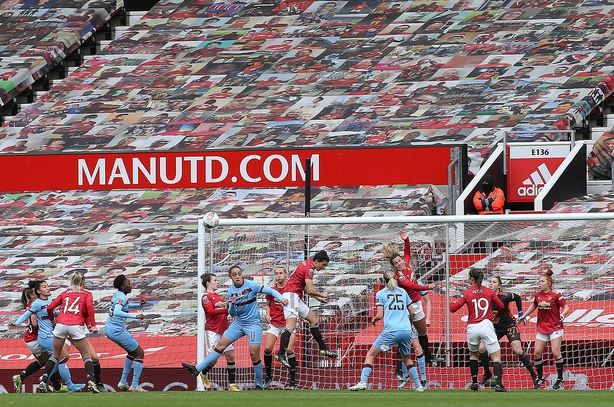 Both teams took time to get going and it was not until the 25th minute that United finally broke through the West Ham defence but Press could not find Ella Toone.

Ten minutes later came United's best opening of the half as a fortunate break allowed Press and James to get in behind but excellent defending from Grace Fisk denied James a tap-in.

The striker then headed over from the resulting corner but United could have paid for sloppy play at the back in the closing minutes of the half, with Martha Thomas shooting wide and Kenza Dali seeing a deflected shot saved by Mary Earps.

It took the home side only four minutes to claim the lead after the break as Millie Turner headed the ball back into the six-yard box following a corner and James nodded in.

That settled United's nerves and six minutes later they had another, Jackie Groenen pressing the West Ham defence before playing a superb pass to Press, who confidently finished beyond Courtney Brosnan.

United were playing with freedom now and United States international Press would have had a second but for a fingertip save from Brosnan.

Down the other end, West Ham forced their best chance when Dagny Brynjarsdottir powered her way through but Earps produced a fine block, and moments later the United keeper pushed a header from the same player round a post.

Press was then denied again by Brosnan and West Ham's woes deepened in the 77th minute when Laura Vetterlein was shown a second yellow card for a foul on Kirsty Hanson.