Dara O'Shea said Shane Duffy has offered him huge support in the background despite the young West Brom defender usurping the experienced Derryman at the heart of the Republic of Ireland defence.

Duffy did not feature against Serbia in Ireland's opening World Cup qualifier on Wednesday night as Stephen Kenny opted for a three-man back line that was made up of O'Shea, Ciaran Clark and Seamus Coleman.

O'Shea, 22, was winning just his fourth cap in Belgrade, but he revealed that Duffy's knowledge and words of encouragement helped him prepare for the challenge.

"Shane has been great with me all week," said O'Shea ahead of Saturday's home clash against Luxembourg.

"He has kind of being giving me tips and advice. When someone with that much quality and experience speaks you listen. For him to be so understanding and supportive was great.

"It gave me a great boost in confidence.

"It was just more tactical stuff and just being a leader there in the back three. You've got to command it. When you are the middle presence there you have to make it felt throughout the team."

"Shane Duffy has been unreal for this country. He is someone I've grown up watching and admiring. Obviously when you get put in there it’s a huge opportunity for me. It’s great to play, but Shane is an amazing player."

Ireland started their campaign with a 3-2 defeat but there were positives to take away from Serbia. O'Shea got slightly caught out for Dusan Vlahovic's equalising goal but overall he acquitted himself well.

There were signs too that the team is starting to adapt to Kenny's methods more effectively but they badly need a win - starting against Luxembourg.

"When you lose a game you want to bounce back as quickly as possible," O'Shea added.

"We have a game on Saturday and a great opportunity at home to get three points. It's something that we need.

"Every kid grows up wanting to play for their country. Watching the World Cup at home, it’s something you aspire to get to. To be in with a chance of playing for my country in World Cup qualifiers and to help the nation to get there is unreal. 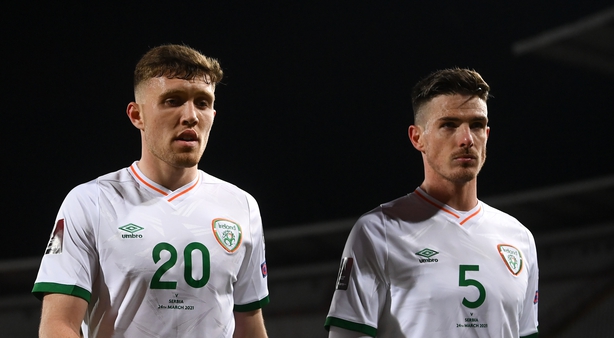 O'Shea was full of praise for another stalwart who helped to steer him through the Serbia game: "Seamus Coleman is brilliant. He's outstanding for club and country and obviously, being the leader he is, to have the chance to play alongside him, which I hadn’t before, was great.

"He really drives the team on and epitomises everything that Ireland is. He is a great leader on and off the pitch and someone you want to play beside."

"I felt very comfortable. It was very natural to be fair. We hadn’t to really work too much on it. We’d been doing bits on it, but it’s not the same as playing a game. As a whole it worked really well and I felt really comfortable. The two lads beside me helped me out really well.

"The squad has huge experience, so I don’t think it matters who is playing in that 11. It’s the squad as a collective. They can give information to us on the training pitch and in the changing room, so I don’t see that as a problem. We’ve got some unbelievably experienced players here, players who have won so many caps for their country and played so many times for their club as well."

Follow Republic of Ireland v Luxembourg via our live blog on RTÉ.ie/sport and RTÉ News app, watch live on RTÉ2 and the RTÉ Player or listen to commentary on RTÉ Radio 1 from 7pm