Manchester United got back to winning ways in the Premier League as Ole Gunnar Solskjaer's men saw off the threat of relegation-threatened Newcastle.

After managing just one victory in their previous five top-flight matches, Solskjaer felt Thursday's 4-0 Europa League shellacking of Real Sociedad showed his side had got over their recent slump.

While they fell short of those standards on Sunday, second-half goals from Daniel James and Bruno Fernandes goals secured a 3-1 victory against embattled Newcastle after Allan Saint-Maximin had cancelled out Marcus Rashford's fine opener.

The result moves United back into second and within 10 points of ruthless Manchester City, while defeat for Bruce at his old stomping ground leaves the 17th-placed Magpies perched just three points above resurgent Fulham.

53 - Manchester United have scored 53 goals in 25 games in the Premier League this term – their most at this stage of a top-flight campaign since the 2012-13 season (60), which was the last time they won the title. Expressive. pic.twitter.com/yih4KTZkxO

The visitors started the brighter on Sunday evening and responded well to Rashford's great solo opener as Saint-Maximin became the latest player to expose the Red Devils' soft underbelly from set-pieces.

But James, who kept his starting role after impressing against Sociedad, fired the home side back ahead before Fernandes wrapped up victory from the penalty spot, with 17-year-old Shola Shoretire coming on for his first-team debut.

It was a great end to a day that started with the Old Trafford giants announcing that Nicky Butt and Mark Dempsey would join Solskjaer on the bench "due to some of the coaching staff having to self-isolate".

Michael Carrick, Mike Phelan and Kieran McKenna were not listed on the team sheet for a game that Newcastle started sharply.

David De Gea tipped over a deflected Joelinton effort that came from his poor early clearance, with the United goalkeeper breathing a sigh of relief after Jonjo Shelvey blazed over following his awful pass out.

Newcastle deployed impressive Miguel Almiron as false nine and were unsettling with their pressing, while the hosts' poor decisions were seeing their attacks break down before Karl Darlow's goal could be threatened.

A fierce James cross was all the Magpies goalkeeper had to deal with until Aaron Wan-Bissaka's snatched effort in the 29th minute, although Rashford's moment of quality would see them find the net a minute later.

Rashford collected the ball on the left touchline and nutmegged Emil Krafth before darting towards the box. The Newcastle right-back recovered to meet him in the area, only for Rashford to cut inside and thump low past Darlow at his near post.

It was a lovely goal that would not take long to be cancelled out.

Saint-Maximin saw a strike tipped over the bar by De Gea after collecting a cleared corner, which would prove the route to their leveller in 36th minute.

The Magpies played it on for Joe Willock to eventually send in a cross that Harry Maguire headed into the path of the Frenchman, who impressively lashed into the top left-hand corner.

De Gea reacted well to tricky Saint-Maximin's next snapshot early in the second half, which was 12 minutes old when the home side went back ahead.

Nemanja Matic turned and hit a low pass, which took a slight deflection off Fernandes, across the box that Jamal Lewis failed to cut out, with James capitalising at the back post as he hit a low and hard shot past Darlow.

Martial followed nifty footwork with a fizzing effort that Darlow did well to stop as the home side looked to pull away, with Rashford seeing a long-range attempt stopped before Ryan Fraser tried his luck on a rare voyage forwards.

Newcastle were now under increasing pressure and gave the hosts the chance to put the match to bed when Willock was adjudged to have brought down Rashford. 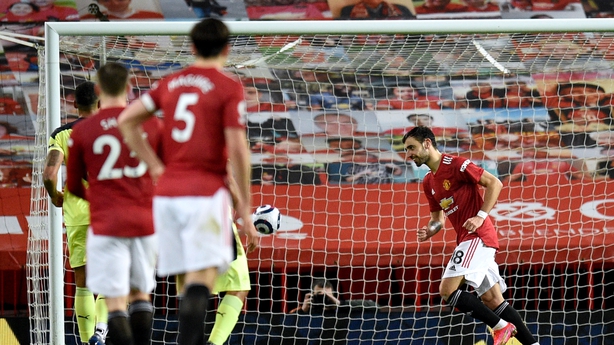 Fernandes stepped up for the 75th-minute spot-kick and slotted home as Darlow contorted himself attempting to save.

Substitute Mason Greenwood, Fred and James tried to add gloss, with Maguire having headed attempts either side of one from Matic.

Solskjaer handed exciting Newcastle-born Shoretire - who only turned 17 on 2 February - his debut off the bench in the closing minutes.