Republic of Ireland and Everton captain Seamus Coleman thanked Carlo Ancelotti for leading the Toffees to their first win against Liverpool at Anfield since 1999 on Saturday evening.

Richarlison's early strike and a late penalty from Gylfi Sigurdsson sank Liverpool and sparked wild celebrations in the blue half of the city.

Coleman, who signed from Sligo Rovers in 2009, had never tasted victory at the ground. Afterwards, he paid tribute to is boss and his team-mates.

"It's an amazing feeling, after coming here all those years and letting ourselves and more importantly letting the blue side of the city down," Coleman told Sky Sports.

"It’s been hard. We can try and brush it off but when you have lived in the city for 10 years it has been difficult to take.

"I am fed up with coming out with the same cliches after losing. I’d thank the manager for the way he set us up and the players put in an unbelievable shift. That was against the champions, so we are delighted."

Meanwhile Ancelotti admitted the happiest man at the club after their triumph was his assistant Duncan Ferguson.

Victory, the first in 23 visits to Anfield, saw Everton draw level on 40 points with their seventh-placed hosts and they are just three behind fourth-placed Chelsea, with a match in hand over both clubs. 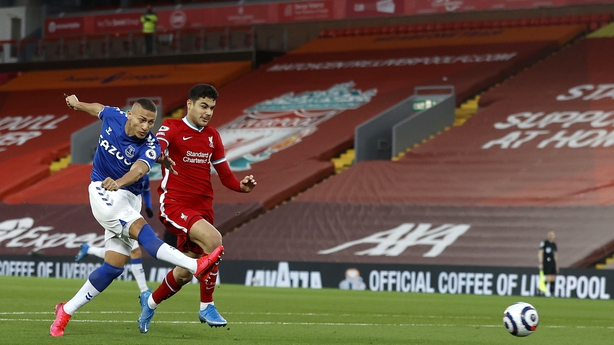 "I think the happiest man in our team was Duncan," Ancelotti said of the former Toffees striker, who has experienced plenty of derby tussles against the Reds during his long association with Everton but has not been able to celebrate victories in many of them.

"We are really happy. The performance was good, difficult, but the spirit of the team was good.

"What this victory means is that we can compete, using our quality, maybe not the technical quality of Liverpool but we had a strong spirit in this period, our belief is improving, of course we have to improve."

Liverpool manager Jurgen Klopp bemoaned more errors for handing the initiative to Everton and giving them a lead which they were not only able to hold but add to, albeit contentiously.

Asked how much it hurt he said: "A lot, a lot. But we conceded a completely unnecessary first goal, we should not forget that, and that is a big part of the game.

"You have to defend and you have to score and in one situation we didn't defend well enough, we made a mistake so they could score, and we didn't use the things we created. That's why we have the result." 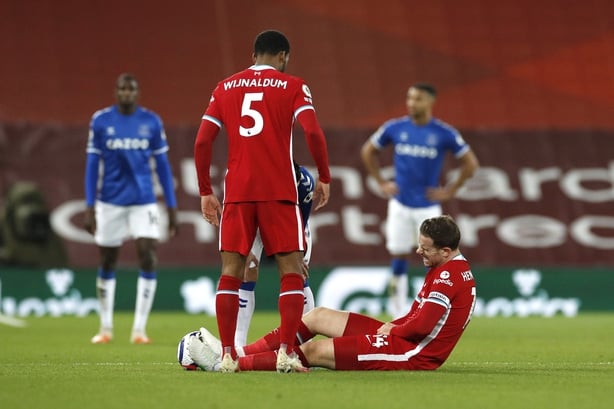 Klopp could not understand the award of the penalty after Dominic Calvert-Lewin went down after running into the back of a sliding Trent Alexander-Arnold nor the speed with which referee Chris Kavanagh viewed the pitchside monitor having been asked to look again by VAR.

"I really think it is unfair to ask me as everyone has asked me that question, which means everyone thought it wasn't a penalty," he added.

"I wanted to talk to the ref after my first few (post-match) interviews but they left already. I wanted to ask what did he see?

"If he is called over there must doubt but he needed only a second. He went over, watched it from three or four yards and 'penalty'."

As if losing their first home Merseyside derby since 1999 was not enough, Klopp lost yet another centre-back option as Jordan Henderson became the fifth no longer fit for duty.

"It is the groin, adductor region. Nothing from the medical department was positive about it. It doesn't look good but we have to look at the scan tomorrow," the German said.