Guelor Kanga converted a second-half penalty for Red Star after Radovan Pankov's own goal just before the interval had given Milan the lead.

Theo Hernandez put the Italians back in front from the penalty spot and although Belgrade defender Milan Rodic saw red for his second booking, Pavkov struck in the third minute of added time.

Bayer Leverkusen slipped to an agonising 4-3 defeat in Bern after fighting back from three goals down to draw level against Young Boys.

The Swiss side raced into a 3-0 half-time lead lead through Christian Fassnacht, Jordan Siebatcheu and Meschak Elia, but Patrik Schick struck twice in three minutes soon after the restart and Moussa Diaby made it 3-3.

But Young Boys' French striker Siebatcheu popped up with an 89th-minute winner.

Croatian side Dinamo Zagreb appear favourites to progress after winning 3-2 against Krasnodar in Russia.

Bruno Petkovic headed Zagreb in front and regained the lead for the visitors after Marcus Berg had equalised for Krasnodar before the break.

PSV Eindhoven must overhaul a two-goal deficit in the return leg if they are to progress after losing 4-2 to Olympiacos in Greece.

But Youssef El-Arabi struck a third for Olympiacos before half-time and Georgios Masouras added a fourth late on.

Roma will start their return leg against Braga with a healthy advantage after winning 2-0 in Portugal.

Edin Dzeko fired Roma into an early lead and after Braga's Ricardo Esgaio received his second yellow card early in the second period, Borja Mayoral scored another away goal for the Italians. 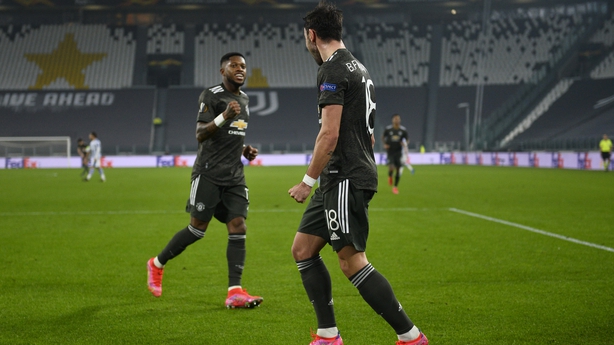 Manchester United took a big step towards the last 16 of the Europa League by thrashing Real Sociedad 4-0 in Turin.

United took control of the first leg, played at Juventus' Allianz Stadium due to coronavirus, after Bruno Fernandes had struck in either half to put them 2-0 up.

Marcus Rashford fired home United's third after a swift counter-attack and with the Spaniards well beaten, Daniel James raced clear in the last minute to add a fourth goal for Ole Gunnar Solskjaer's side. 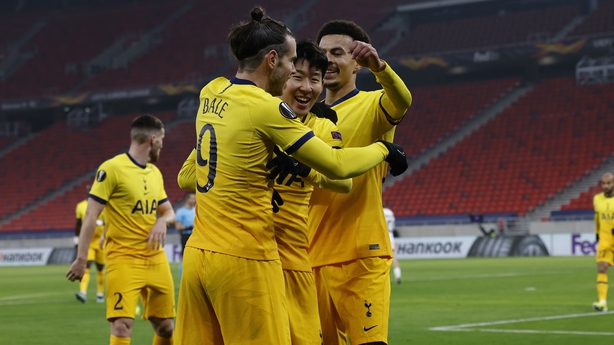 Tottenham also look to have wrapped up their round-of-32 tie after cruising to a 4-1 win against Austrian side Wolfsberger in Budapest.

Heung-Min Son, Gareth Bale and Lucas Moura were all on target as Tottenham took control before half-time at the Puskas Arena.

Wolfsberger pulled one back through Michael Liendl's penalty after Moussa Sissoko's challenge on Christopher Wernitznig, but Carlos Vinicius scored his fourth Europa League goal of the season for Tottenham in the closing stages.

Leicester held firm after coming under concerted second-half pressure to draw 0-0 against Slavia Prague in the Czech Republic capital.

Arsenal drew 1-1 with Benfica in Rome, while Rangers were 4-3 victors over Royal Antwerp.