The on-loan Manchester United forward netted a brace in his first Premier League game since July to help inspire victory at Villa Park.

It came in front of the watching England boss Gareth Southgate as Lingard looks to resurrect his international career. The 28-year-old has not played for Southgate's side since 2019.

Tomas Soucek opened the scoring as the Hammers clung on to fifth place ahead of Everton and they are now just two points behind Liverpool after the champions' defeat to Brighton.

Villa, who slipped to a fourth league defeat in six games, remain ninth. Ollie Watkins grabbed a late consolation but Dean Smith’s side often struggled to handle the organised and vibrant Hammers.

The visitors were always sharper and Emi Martinez saved comfortably from Michail Antonio’s miscued half-volley before beating away Lingard’s 25-yard drive during a strong start.

Lingard, appearing for just the fourth time this season after falling out of favour at Old Trafford, helped the Hammers to an expansive and positive opening which stretched the hosts. 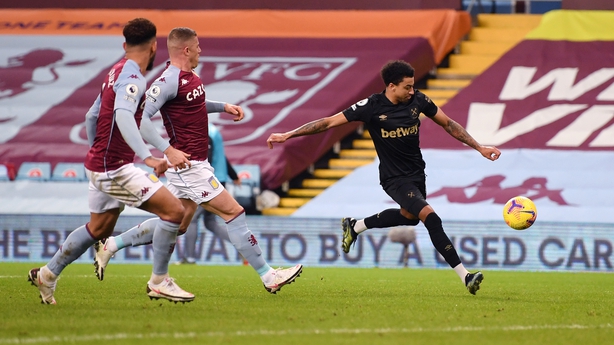 Yet Villa nearly grabbed the lead when Watkins planted a free header over from Matt Cash’s cross.

It sparked them into life and Watkins threatened again when he nearly cashed in on Craig Dawson’s slip, clipping the post after being teed up by Jack Grealish.

Ross Barkley then dragged a shot wide after half an hour but Villa lacked composure when it mattered most.

Not that West Ham had found any as Soucek curled wide before Vladimir Coufal wasted a fine chance when he struck straight at Martinez.

Three Lions manager Southgate would have been heartened by Declan Rice’s industry, while Lingard continued to impress despite his lack of game time at United.

But nothing separated the sides at the break and Villa replaced the underwhelming Anwar El Ghazi with Bertrand Traore in the search for more creativity.

The Hammers, though, always looked the more likely to break the deadlock and they took control with two goals in five minutes.

They pounced after 51 minutes when Antonio held the ball up for Said Benrahma to cushion a first-time pass to Soucek, and the midfielder steadied himself before drilling in low across Martinez.

Five minutes later a quick break from Benrahma, after Watkins lost the ball on the edge of his own area, ended when Antonio clipped over to Lingard and he beat Martinez.

The Hammers kept coming and only a brilliant clearance stopped Antonio making it 3-0 after 62 minutes when he lifted over Martinez.

Villa offered little although they looked to have set up a tense finale when Watkins finished off Grealish’s pass with nine minutes left.

But Lingard had the final say two minutes later when he combined with Antonio again to drill through Martinez’s dive.