Arsenal saw their recent Premier League resurgence checked as they were held to a goalless draw by Crystal Palace.

Having won their last three league outings to end a barren spell, the Gunners were unable to find a way past their visitors - who came closest to winning the game through a James Tomkins header which hit the crossbar.

The 0-0 draw means Palace remain unbeaten in their previous five meetings with Arsenal and they stay just a point behind Mikel Arteta's men. 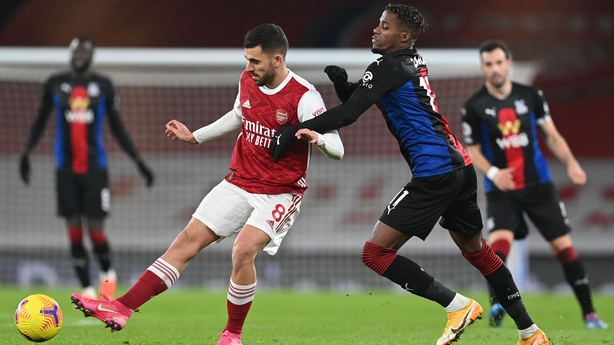 Arsenal made two changes to the side that won 4-0 at West Brom in their last league outing - both enforced as Kieran Tierney and Pablo Mari were left out as precautions.

The hosts were largely frustrated by a Palace side playing on the counter-attack and on the few occasions they did get in behind, they largely wasted the opportunity.

Pierre-Emerick Aubameyang shot straight at Vicente Guaita in one moment of promise, while Hector Bellerin managed to take the ball off the foot of team-mate Alexandre Lacazette when the in-form France forward looked poised to strike.

It would be Palace who came closest to breaking the deadlock before the interval - firstly as Eberechi Eze's deep free-kick was headed against the frame of the goal by Tomkins.

Then Bernd Leno was called into action, making a fine diving stop to keep out Christian Benteke's effort moments later.

Arsenal were still struggling to unlock a rigid Palace backline after the restart and were restricted to pot-shots on Guiaita's goal on the few occasions their attacks did not break down. 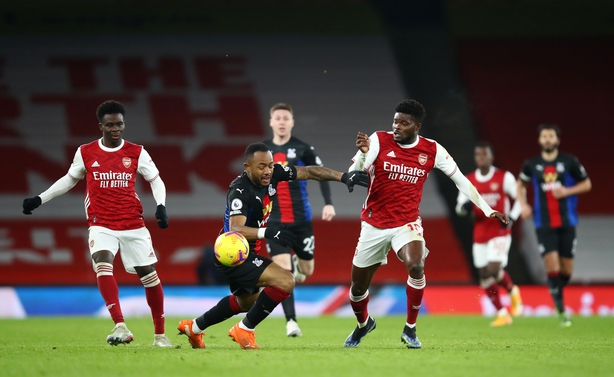 Arteta responded by introducing club-record signing Nicolas Pepe in place of Ainsley Maitland-Niles, with Bukayo Saka reverting to left-back as a result.

Palace were still a threat on the break and Zaha burst forward only to see his cross towards Eze cleared away by a backtracking Granit Xhaka.

Benteke miscued his header from the resulting corner and James McArthur turned the ball into the grateful grasp of Leno.

Zaha wanted a penalty after going down under pressure from Rob Holding but referee Andre Marriner correctly waved away the protests.

Arsenal suddenly moved up a gear as the game entered the closing stages but never looked like getting the goal to settle the contest and remain 11th in the table as a result.