Manchester City will be a bigger title threat to Liverpool than Manchester United, according to RTÉ Soccer analyst Stephen Kelly.

City are four points behind the pair, although they have played one game less, with United and Liverpool set to face-off at Anfield in under two weeks' time.

The blue side of Manchester has tasted Premier League success more recently than their neighbours, collecting titles in 2018 and 2019, with Alex Ferguson the last manager to guide United to a first-placed finish back in 2013.

Former Republic of Ireland international Stephen Kelly believes that the Premier League 'is still Liverpool's to lose' but he admits that Manchester United are genuine challengers. #RTEsoccer pic.twitter.com/3NpDeL7yy0

And, speaking on RTÉ's Game On, Kelly backed City to be closer to Liverpool come the end of the season.

"I think they've (City) being going about their business quietly," said the defender who won 39 caps for Ireland.

"They've not being playing a style of football as close to what we saw when they went and won the leagues comfortably two years in a row.

"They've been doing it a little differently. Defensively they've been very solid, and they've been winning games 2-0 or 1-0; just getting back up the table.

"Now they're in a position where if they win their next game they're right in contention, and I genuinely feel that they're more of a title contender than Manchester United are. 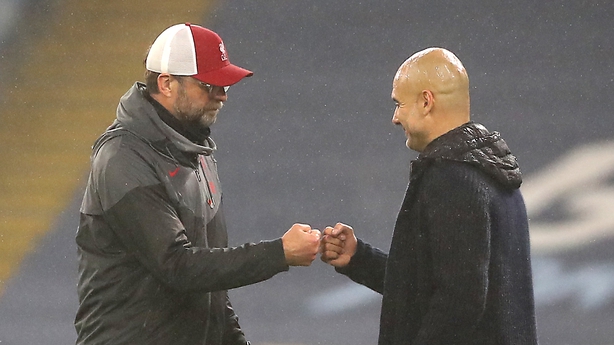 City aren't due to play Liverpool in the Premier League until early next month, while the next Manchester derby is fixed for March.

"It's unlike City," Kelly continued.

"We've got used to them just playing this football that just wipes teams off the board. They're not doing it the same way.

"It's been a little bit less showy, but they're getting results, they're winning well, they're comfortable in games.

"Chelsea aren't in great form but still, against a good side, away from home, that was a big, big result for them.

"You just kind of feel that they're getting back to winning ways and they're going into games very confident.

"They are, for me, the closest team to push Liverpool at the end of the season."

United started December with a Champions League exit at the hands of RB Leipzig, and it looked at the time that Solskjaer might be in trouble.

But England's most successful club are unbeaten since then, with draws against City and Leicester the only blots on their copybook.

"They've been playing some really attack-minded, scintillating football and they deserve to be there. They've put a run of results together and they really are a threat.

"For me it's still Liverpool's to lose - they have probably the best squad and they're playing really well but United are really pushing."