Having already slipped out of the European places following a hard-fought draw at Fulham on St Stephen's Day, Southampton were unable to bounce back in the absence of manager Ralph Hasenhuttl, who is in self-isolation after a member of his household tested positive for Covid-19.

David Moyes brought on Said Benrahma, Jarrod Bowen and Michail Antonio in the second half in an attempt to find a way through the home defence, but despite some late pressure they were unable to make the breakthrough.

The result leaves the Saints in ninth but level on points with fifth-placed Aston Villa. 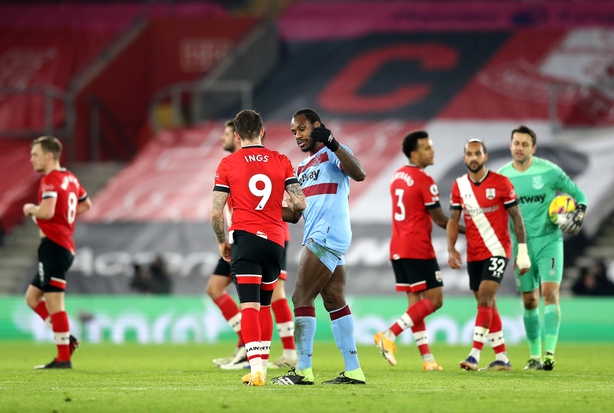 Southampton started the game on the front foot, pushing West Ham back inside their own box.

Danny Ings almost made the perfect start on his return to the starting line-up following injury, weaving his way past two defenders in the box before putting the ball beyond goalkeeper Lukasz Fabianski, only for the linesman to raise the offside flag.

Soon after there was a moment of concern for Saints when Che Adams went down in the penalty area after being accidentally kicked in the head by Craig Dawson, who was attempting a volley. Despite the heavy contact, the match was allowed to continue without a head injury assessment.

Ryan Fredericks forced Alex McCarthy into his first real save of the game in the 42nd minute when he headed down a cross at the far post, but the goalkeeper was able to gather from the narrow angle.

In the second half, the in-form Theo Walcott came closest to breaking the deadlock in the 62nd minute when he fired in a dipping drive from outside the area, forcing Fabianski into an awkward save after the ball bounced right in front of him.

Both sides enjoyed periods of possession but neither was able to capitalise or create many clear-cut chances.

Tomas Soucek did have a good chance to put the Hammers in front when he found himself unmarked at the far post from a free-kick and managed to get his header into the ground and on target, but McCarthy was equal to the effort.

Benrahma then almost sealed all three points for the visitors in the 85th minute, but McCarthy made a great close-range save to deny the substitute.