Arsenal manager Mikel Arteta admits their current run of results are unacceptable and do not meet the high standards the club has set but maintains they have been unlucky during a seven-match winless run.

The 2-1 reverse at Everton was their fifth defeat in that sequence and has resulted in their worst points return - 14 from 14 matches - since 1974-75.

They have lost eight times in total and only bottom side Sheffield United have a worse record and it has put Arteta, who marks his one-year anniversary at the club on Sunday, under pressure.

And he accepts they have to turn things around before the situation becomes "impossible".

"I understand (the scrutiny) but my energy and focus is only on getting the team out of the situation," he said.

"The spirit and fight the boys show every time they go on the pitch you can see, you cannot deny that.

"Against the results there is no question it is not good enough and not acceptable for the standards of this football club.

"Obviously it is a really complicated situation but I am very encouraged from what I see from the players who to try to continue what they are doing.

"We have to improve but as well I think we have been very unlucky not to pick up many more points.

"We have done well in the Europa League and in the cups but struggled to get results in the Premier League.

"The reason we are losing matches is because the margins are so small but we need (to change) those margins quickly before the situation becomes impossible."

Arsenal registered just three shots on target in the whole game and their form up front was not helped by the absence of Pierre-Emerick Aubameyang who was missing with a calf problem.

The Gabon striker could miss the Christmas programme.

"We want him as quickly as possible. He has a small strain and will need a few days. I don't know if it is a week or two weeks, it depends how the injury goes." 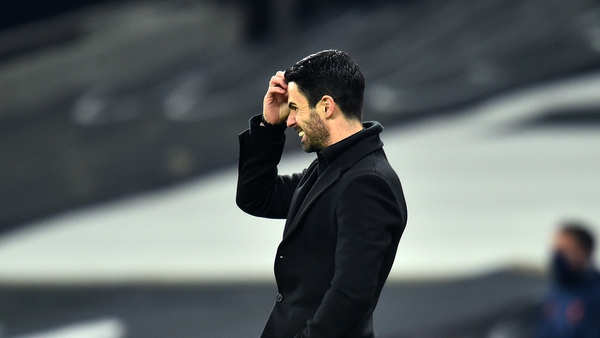