Gunners captain Aubameyang started the process of atoning for his own goal in Sunday's miserable 1-0 home loss to Burnley, sweeping in a neat finish as Arsenal scrambled a Premier League point at the Emirates Stadium.

Walcott had put the again-impressive Southampton into an early lead with a high-quality effort.

The Gunners had Gabriel sent off for two bookings in four minutes – the first a pointless act of petulance in kicking away the ball. 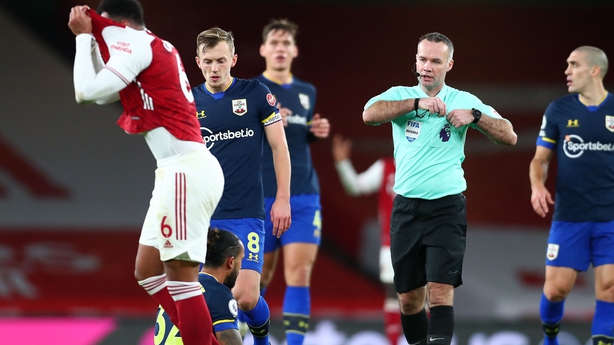 After Granit Xhaka’s ill-disciplined dismissal in Sunday’s Burnley loss, another red card was the last of boss Mikel Arteta’s demands.

A draw will hardly ease the pressure on manager Arteta however, with Arsenal’s winless league run now stretching to six matches.

Arteta had told his critics "my chest is here, hit me" in accepting Arsenal must "take the bullets" in the wake of their awful form.

And those biting volleys will keep on coming now, with Arsenal still winless in the league since their 1-0 victory at Manchester United on 1 November.

Southampton managed to keep themselves in the league's top four however, with any frustrations over a draw just another sign of the burgeoning confidence under boss Ralph Hasenhuttl.

Arsenal pressed with purpose and energy from the off, but were never able to generate any real rhythm on the ball.

Home heads dropped heavily then when former Gunners favourite Walcott raced through and chipped home a delicate finish to put Saints into the deserved lead.

Che Adams battled for the ball on halfway and slid in for a fine through-ball, that positively begged for Walcott to convert.

The ex-Arsenal forward licked his lips, raced onto the ball and dinked over the helpless Leno.

Then, for good measure, Walcott wheeled away and broke with player tradition – to celebrate against his old club.

The Saints winger cantered off in delight before being mobbed by his impressed team-mates.

Walcott’s upbeat response was doubtless more to do with his sheer joy and relief to be on a run of fitness and form than any lingering frustrations at his Arsenal exit, back in 2018.

The Gunners appeared wholly flummoxed by slipping behind, to compound their worrying recent run of form.

Nicolas Pepe saw a rasping shot well blocked by Jan Bednarek, before Dani Ceballos had a spurious penalty claim dismissed by the officials.

Arsenal’s plight appeared bleak when trailing 1-0 at the break, but the home side came out refreshed  and quickly levelled.

Saka cut in off the left and fed Eddie Nketiah and it was his fine reverse pass that opened the Saints defence. 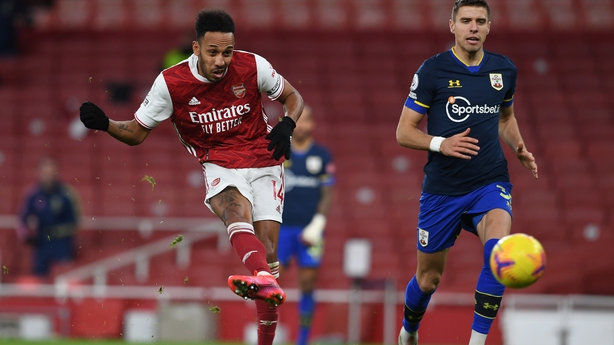 As the ball angled into the box, Aubameyang latched on, picked his spot and delivered.

After his own goal against Burnley, here was the perfect response.

Just when Arsenal thought they could plot a course for victory however, Gabriel felled Walcott for a second yellow card, to walk for his troubles.

Just four minutes after kicking the ball away in a pointless act of petulance, here was another Arsenal red card that was both utterly avoidable and entirely unwanted.

Arsenal brought on David Luiz for Nketiah and promptly sat back in a bid to protect their point.

Saints went on the attack and replacement Nathan Redmond struck the bar with a first-time effort, having just reached Oriol Romeu’s teasing ball.

Arsenal could have snatched victory at the death, but Rob Holding’s thumping header clattered the woodwork and bounced safe.