Three years ago, Jack Byrne spent Christmas night at Eoin Doyle's house as the two Irishmen prepared for a League One clash with Fleetwood Town.

They lost 2-1, and both men had moved on from the Latics within nine months. It wasn't a particularly happy spell in Byrne's career but now he's in a very positive place.

It's almost exactly two years since he moved back home to join Shamrock Rovers where's he's flourished, winning an Extra.ie FAI Cup, a league title, and establishing himself as a full Republic of Ireland international.

On Sunday he'll look to lead the Hoops to a memorable double when they take on Dundalk in the cup decider at the Aviva Stadium. It'd be a sweet end to a rollercoaster year for Byrne, who had to overcome Covid-19 in October.

"I spent a fair few Christmases away, obviously as a kid over in England, missing family and stuff," he told RTÉ Sport.

"The last two years, me being home, getting to spend Christmas with your loved ones, it's a great time of year. It's going to be a bit different this year but it's still a brilliant time.

"You see the lights going up on Grafton Street, you want to come home, go into town with your family and get into the Christmas spirit and stuff. It's completely different [in England] but I am happy to be home this year for Christmas." 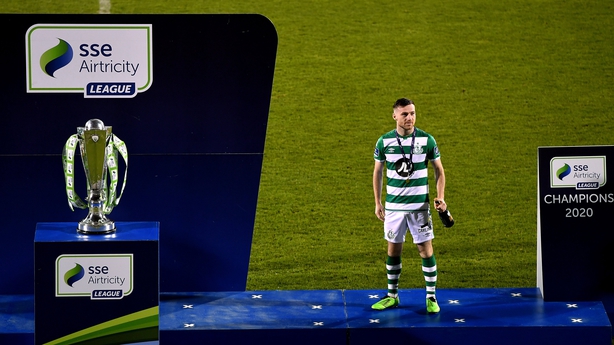 Byrne talked up the importance of the smaller things in life, with his contraction of the coronavirus sharpening his appreciation for family and friends.

"I was probably bed-bound for two and a half/three weeks and couldn't get back into training for four/four and a half weeks," he said.

"I went through all the heart scans and all that stuff. I really do have to thanks Dr Alan Byrne. He really looked after me. It's not a nice thing to get, especially coming up to Christmas now, I know there's a fuss about everybody going into town and wanting to be out with bars back open but I can;t stress enough how important it is just to stay safe at this moment in time.

"I'm not wary about getting it again, I'm just wary about one of my family members getting it. I saw the effect it had on me. I was quite lucky that when I got it I was in a bubble with the Ireland camp and when I came home I was able to self-isolate straight away.

"If I'd picked it up in a different circumstance and had to go home to my family and passed it on them it could have been a different story."

Byrne is now braced for another massive battle with the Lilywhites at Lansdowne Road. Last year the final between the clubs went to penalties after Michael Duffy forced extra-time with a stunning leveller.

"We obviously came into the season wanting to win the league, wanting to defend the cup, because we know how good it felt last season, and to be in this situation is brilliant," Byrne added.

"I just think it goes to show the hard work that everybody has put it around the club this year. We're one game away from making history.

"It's all about getting our hands on that cup.

INCREDIBLE! Michael Duffy, with a moment of absolute brilliance, rescues Dundalk with seconds to go. It's extra-time in the FAI Cup final! https://t.co/3OeMqqfxm4 #RTEsoccer pic.twitter.com/xUIo5yws7V

"As soon as we did you had an unbelievable footballer, Michael Duffy, who scored one of the best goals I've ever seen in live football with the last kick of the game. They have players like that all over the park. We have to be wary of them.

"A lot of credit has to go to the clubs and the League of Ireland itself. It's not easy with what's going on in the world at the moment. When this all started, I don't think anyone seen the season getting finished so to be in this situation now where we're going into a cup final, we've played all the games, the league deserves a lot of credit."

It remains to be seen if Byrne will remain a Shamrock Rovers player in 2021 but for now he's living in the moment and enjoying every second.