The big two once again go head-to-head in the Extra.ie FAI Cup but both Shamrock Rovers and Dundalk are in very different places to this time last year.

Dundalk went into the 2019 final looking to complete a domestic treble, having already secured the League Cup and Premier Division titles.

Then manager Vinny Perth saw his side undone in a penalty shootout after a dramatic climax to the game saw Rovers take the lead on the 89th minute before an injury time leveler forced extra-time.

As tight a game as it was, the result marked the start of a downward spiral for Dundalk under Perth and a poor start to the season, coupled with an exit from the Champions League saw him replaced by Filippo Giovagnoli.

Rovers meanwhile have been on an upward trajectory since that final gave Stephen Bradley his first piece of silverware as manager and the club's first FAI Cup since 1987.

It's Bradley’s side who now go into the final as league champions and favourites, having completed an unbeaten season and the Rovers boss has since credited last season’s cup triumph as being the spark that ignited their title triumph.

Now that the Hoops have finally got their hands back on the cup, Bradley is eager to see them retain it and complete their first league and cup double since 1987.

"We have a chance to do a double, but I think it’s just as important, maybe more important this year and we go and try and win the game," he said.

"I think it’s important we kick on and we go again. And this gives us a chance to do that. We’ll be ready to go, we’ll be motivated, probably even more motivated than we were last year."

Bradley is expecting a slightly different challenge from Giovagnoli’s Dundalk side, with the Italian head coach having stamped his mark on the Lilywhites, but the Rovers boss still believes that supporters are in for an entertaining clash. 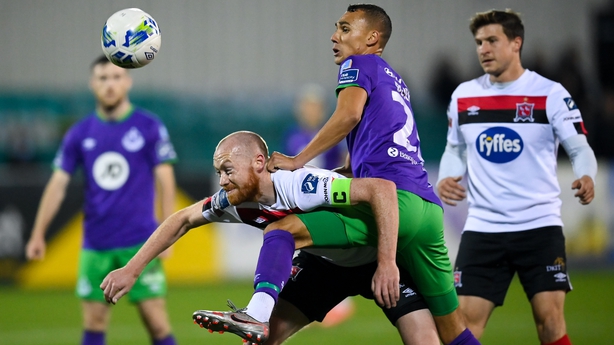 "They’re slightly different to what you would have faced in the past under Stephen Kenny or under Vinny Perth.

"You could go into systems and tactics but I won’t, but what hasn’t changed is they have a fantastic group of players. They have real quality all over the pitch.

"For me it’s a showpiece game for the year, it’s the two best teams with the two best sets of players going head-to-head.

"I think last year was a good game, really tight and I think this year will be no different," he added.

Bradley will be hoping to call on the services of Greg Bolger who is back in the reckoning after training all week following his comeback from a long-term lay-off in the 2-0 semi-final victory over Sligo Rovers last weekend.

Gary O'Neill is definitely out with a quad injury but Rovers are hopeful that Greg Bolger has sufficiently recovered from an ankle injury to play a part. Roberto Lopes should also be involved after self-isolating due to Covid-19.

Dundalk head coach Giovagnoli will again be without the services of Pat Hoban who underwent ankle surgery earlier in the week.

Dan Kelly suffered a blow to his eye during the Lilywhite’s 3-1 Europa League defeat to Molde on Thursday but is expected to be fine for the final and elsewhere Dundalk have a clean bill of health.

The Lillywhites once again must cope with a quick turn-around between their European exploits and domestic duties but given the nature of their Europa League group results, the FAI Cup has proven to be a welcome distraction.

Dundalk are still without a point in the group stage, their head coach Giovagnoli has been banned from the touchline and the club fined €50,000 for 'shadow coaching’ by the Italian who lacks a UEFA Pro licence.

In contrast their FAI Cup run has been a relative stroll, with a 4-1 quarter-final victory over Bohemians followed by a massive 11-0 semi-final hammering of Athlone. 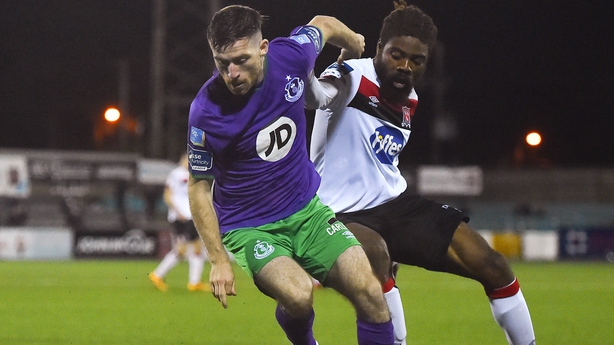 The Lillywhites were well beaten by Molde on Thursday evening and perhaps for the first time in this European campaign looked to be slightly out of their depth but defender Brian Gartland is confident that they’ll bounce back in time for the cup final.

"We’ve got to take the confidence and the positives from the last few weeks in terms of the good performances," he said.

"There are so many positives so we’re not going to dwell on the negatives because we’ve got a big enough game coming on Sunday."

For Dundalk there's the sense that this could be the final hurrah for a great team, with contracts expiring for several key players at the end of the season and questions over whether they'll be with the Lilywhites next season.

One player who will be at the club next season is Patrick McElheney and he isn't ready to concede the crown of Ireland's best club to Rovers just yet.

McElheney is eager to deny Rovers the double and remind everyone just how successful Dundalk have been over the last few years.

"Rovers won the cup last year on penalties and won the league this year but they've a long way to go before they’re able to say they’re us," he said.

"Rovers are just starting on their course, but it’ll take a number of years for a team to be able to say they could do what we’ve done.

"Qualifying for the Europa League group stages is an amazing achievement, but we need to be winning trophies. It's no secret we haven’t been good enough domestically this season but a win against Rovers will sort that right out."

Unlike Dundalk, Rovers have had the entire week to relax and prepare for Sunday’s game and in watching their opponent's Europa League defeat on Thursday, would have quickly noticed just how vulnerable Dundalk were from crossing.

All three of Molde’s goals came from headers and Rovers will hope to exploit that and create similar problems for the Louth side on Sunday.

The Hoops are the fresher side, have had more time to prepare and have shown the better form throughout the season.

The old cliche about a cup game being a one-off still rings true but Rovers have already beaten Dundalk twice this season, putting seven goals past them, with Jack Byrne pulling the stings with a starring role both times.

Should Dundalk fail to get to grips with Byrne again, it could be curtains for them but the problems lies in the quality that the champions have all over the pitch.

Focus on Byrne and space opens up for the likes of Aaron McEneff and with some weary travel-heavy legs at Dundalk, Rovers look likely to complete their first double in 33 years.