Vera Pauw says her "heart is here" as the Republic of Ireland head coach indicated that she has yet to make a decision about remaining in charge after missing out on Euro 2022 qualification.

Ireland lost 3-1 to Germany at Tallaght Stadium on Tuesday night and, coupled with Ukraine beating Montenegro, a play-off place proved out of reach.

Speaking to RTÉ Sport at full-time, an emotional Pauw predicted further progress for the current crop of Irish players but also remained coy on her future, although she added that the ball was also in the FAI's court.

"Let's first see if the FAI wants me still, that is the first question of course," she said.

"And if they want, I need to go home, rest, talk with my partner and then look into what I'm going to do.

"But my heart is here. I just broke down... and it's because I'm so proud of this team. Such a bunch of tigers."

Republic of Ireland v Germany - "We didn't leave it here, we left it in Kyiv," is how Vera Pauw looks on the failure to secure a play-off spot for Euro 2022. The emotional Ireland boss also admitted that she has yet to decide on her future in charge of the national team. #IRLGER pic.twitter.com/Agp7JJeSa4

Pauw was also adamant that Ireland will get to a major tournament sooner than later based on the rate of progression made in recent months.

"We will be there in 2023. The World Cup, Ireland will be there," she said, before touching on her chances of remaining at the helm for that campaign.

"This is not the moment to decide of course, because now it's a yes. Of course I want to be there. But there are other things I need to take into consideration, starting with if the FAI wants me. But my heart is in the group, this is clear." 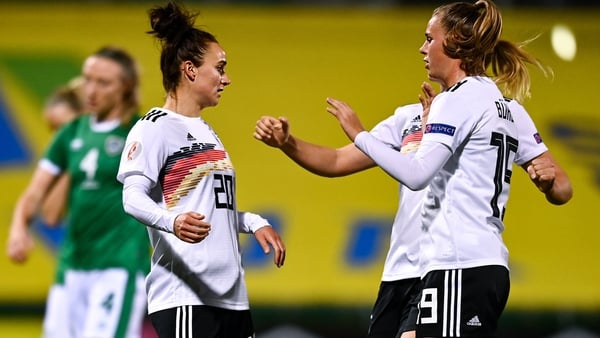