Chris Wood's early strike proved the difference as Burnley ended their long wait for a first Premier League win of the season by edging out a Crystal Palace side that lacked a cutting edge in Wilfried Zaha's absence.

Palace manager Roy Hodgson revealed Zaha had been ruled out of the Turf Moor trip after testing positive for coronavirus and although they created enough chances to claim a point, it was clear they missed their talisman.

The decisive moment of the game came as early as the eighth minute when Wood found the back of the net after being put through by strike partner Jay Rodriguez, making his first league start in two months, as the Clarets won 1-0.

Burnley came into this fixture as the division's lowest scorers and this was only their fourth goal in eight matches - and first in five games - but it was enough to move them out of the relegation zone.

Johann Berg Gudmundsson clattered the crossbar on his 100th Premier League appearance, which meant Burnley were hanging on as full-time approached.

But Nick Pope saved brilliantly from Michy Batshuayi - Zaha's replacement - and substitute Christian Benteke in the second half to ensure the Clarets claimed their first league win since 18 July.

Pope was called into action inside the first 90 seconds, his palms stung by Nathaniel Clyne's effort from distance but Burnley then ended their long goalless stretch, scoring at home for the first time in the league this season.

Gudmundsson directed a hopeful ball towards the area but off-balance Palace defender Cheikhou Kouyate headed into the path of Rodriguez, whose clever backheel allowed Wood to steal in and slot home. 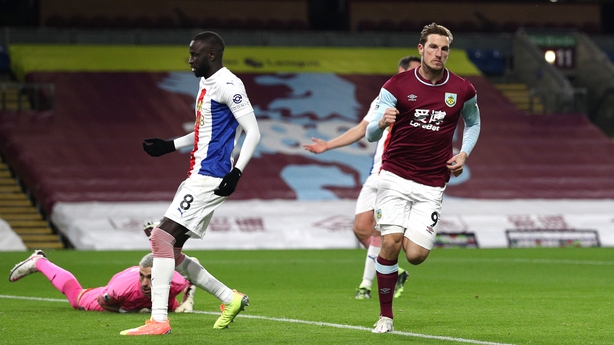 Palace responded well to going behind with Batshuayi making life difficult for the hosts, only just failing to get a final touch when the ball was rolled along the six-yard area by James McArthur.

After Burnley's defenders sat back Batshuayi's shot only just missed Pope's right hand post while the goalkeeper had to be alert as he tipped over a curling and dipping effort from distance from Andros Townsend.

Pope's opposite number Vicente Guaita was perhaps a touch fortunate a mistimed punch from an innocuous Dwight McNeil corner did not end up in the back of the net as the Clarets ended the half firmly on top.

Burnley boss Sean Dyche was left fuming on the touchline after a clumsy challenge by Kouyate prevented Rodriguez going clean through and went unpunished, but replays showed the coming together took place just outside the area.

It was nevertheless an encouraging start to the second half for Burnley and Gudmundsson should have doubled their lead when McNeil picked out his team-mate in plenty of space but a first-time effort cannoned back off the crossbar.

They were given a major let-off on the hour as an errant McNeil backpass put Batshuayi one-on-one with Pope, who was off his line quickly and was helped by the on-loan Chelsea striker scuffing his shot straight at him.

It was becoming an end-to-end affair and Guaita did brilliantly to palm away a Wood header after Kouyate had been unable to intercept an Ashley Westwood dink into the area.

As the game headed into added-on time, Benteke was denied from point-blank range by a left arm from a spread-eagled Pope and the Palace substitute then spurned another opportunity after taking a bad touch when put through.

That allowed James Tarkowski to nip in and snuff out the danger, enabling Burnley to celebrate an overdue victory.