Ireland failed to win, once again, at the Aviva, however, manager Stephen Kenny took time to applaud his players for all that they have gone through over the past two months playing for their country in the middle of the coronavirus pandemic.

The manager said the players have been really unsettled throughout the last two international windows and added that it was a very difficult time for the squad and their families.

Kenny believes that the players maintained a brilliant mentality throughout the period, where Ireland played six matches over two incident-packed weeks in October and November.

Ireland played out another scoreless draw in Dublin on Wednesday night, bringing to an end the 2020 international calendar, while the team have not managed to score a goal in the last seven matches.

Kenny is still without a first win as international manager and he will now have to wait until the 2021 fixtures to find that elusive maiden victory.

Ireland were the width of a crossbar from beating Bulgaria in their final Nations League encounter as Robbie Brady smashed a second-half effort off the woodwork, and despite the statistics of the side's inability to hit the back of the net, the manager had nothing but praise for the players.

"I'm disappointed that we didn’t win the game, even though we didn’t play well in the first half," said Kenny, speaking at the post-match press conference.

"It’s very unsettling for themselves and their families. It’s been a very difficult period over the last two months. We lost some players with bereavement in this camp – James McCarthy's father unfortunately passed away – we lost players through injury.

"There were a lot of issues and in the last two camps, we were probably missing players in double figures.

"But regardless, all of the players showed a brilliant mentality, gave everything of themselves took everything in their stride and just applied themselves correctly, so I applaud them for that and for their determination even though we didn't win the game." 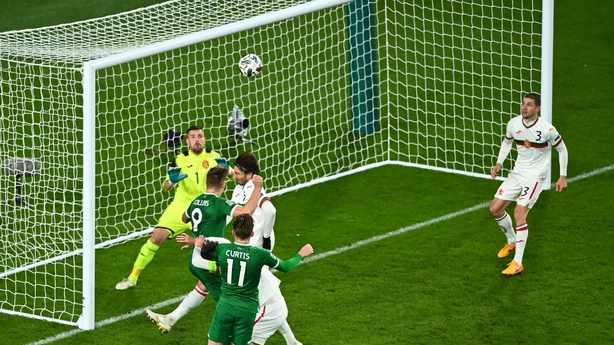 Kenny sent out another patched-up side for the home clash with Bulgaria, having lost several players in the build-up to the game.

And the manager admitted that he was disappointed with the first-half showing, as his side lacked cohesion, while they also caused problems for themselves in the opening period.

"In the first half, with three debutants playing, and a lot of changes to the team, we weren’t very cohesive," said Kenny.

"Our passing was erratic in the first half and we never really got our wingers into the game until Daryl Horgan’s brilliant bit of skill and chip to the back post for James Collins.

"We caused a couple of our own problems with passes intercepted, but they didn’t really have any chances, although they had some passages of decent play.

"In the second half, I thought we were much better and played quite well, obviously Robbie Brady’s shot off the crossbar was a brilliant effort.

"[There were] chances for Ronan Curtis, James Collins again and all the substitutes who came on contributed and it gives us a much greater scope in the panel for the qualifiers in March."

And Kenny feels that his side should have capitalised on the quality of ball that Brady was delivering from set-pieces during the game.

There were some positives to take from the result, however, as Ireland managed to avoid relegation to League C of the Nations League, while the manager feels that there will be real competition for places by the time the World Cup qualifiers come around in March.

"The big play-off game, a tough draw away to Slovakia, was the big game for us. We performed brilliantly in the game were beaten on penalties.

"We've used the Nations League to blood a lot of players, some by design and some because we've had an inordinate number of players ruled out for a variety of reasons.

"That will stand us well in the future and it will give us more options."

"A lot of people have put themselves forward. We will have genuine competition for places. "

While the manager praised the players for how they handled the Covid crisis, he also admitted that it had been an intensive period personally, having to deal with everything that was going on, while also trying to stamp his personality on his new side.

And Kenny said that he sent his players back to their clubs safe in the knowledge that the squad will be stronger by the time that they come back for the World Cup qualifiers.

"I'm looking forward to getting to matches in England if I can. I love being in the game and the involvement, so I’m not really one for long breaks," said Kenny, when asked if he had any downtime planned to recharge the batteries.

"It’s not something I would have ever envisaged. I had plans on how I would manage things but it just wasn’t possible. We had meetings through the night dealing with Covid issues and it was a very intensive period.

"We appreciate [the players’] commitment over the last couple of windows, because it hasn’t been easy for them. They have given everything. They have given us a lot of food for thought for the World Cup qualifiers. A lot of people have put themselves forward. We will have genuine competition for places.

"We’ll be all the better for what we have learned over the last couple of windows, myself and the coaching staff.

"The World Cup qualifiers are in March, three games, we haven’t been in a World Cup since 2002, so it is something to get excited about."