Cork City will meet Peamount United in the 2020 FAI Women's Cup final on 12 December after they each got through their respective semi-finals on Sunday afternoon.

Two goals from Saoirse Noonan led Cork to a 2-0 victory over Treaty United in Bishopstown Stadium, while a single strike from Dearbhaile Beirne earned Peamount United the win against holders Wexford Youths.

Both Cork and Peamount have each lifted the trophy once in their respective histories and this will be a first match-up of the two teams in the showpiece event.

When Noonan is in form, Cork usually prevail. That was certainly the case in their last-four duel with Treaty United as her impact proved to be the difference.

Two first-half goals were enough for Ronan Collins' team to book a place in the decider, but Treaty certainly made it difficult for them.

Noonan headed the home side in front when she rose highest in the penalty area to meet an in-swinging corner kick.

Treaty hardly had time to catch their breath when Noonan scored her second of the game and that was it despite Gillian Keenan and Aoife Cronin going close to pulling a goal back. 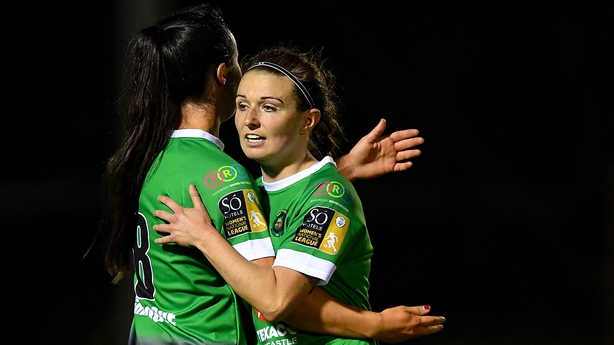 Just four days after their admirable display in the UEFA Women's Champions League, Peamount were back in the thick of the action and they went with the same starting line-up.

This was always going to be a fierce contest with the current cup holders going up against the league champions, so it was no surprise that the intensity was high from early on.

There was little between the sides as they went in at the break scoreless, but it was Peamount who eventually took the lead when Dearbhaile Beirne fired home.

The Dublin outfit hung onto that slender lead until the very end.

Wexford emptied their bench with Sinead Taylor and Vanessa Ogbonna introduced to find some firepower up front, but Peamount showed maturity in seeing the game out with Karen Duggan excelling.