Republic of Ireland internationals Shaun Williams and Alex Pearce helped to mastermind an impressive win for Millwall at Preston North End after being placed on to a hastily arranged interim management team.

The club subsequently placed all of their coaching staff into self-isolation, with Williams, Pearce and under-23 manager Kevin Nugent tasked with taking the reins.

They made the perfect start tonight as a smart finish from striker Kenneth Zohore and a late Jed Wallace penalty proved enough for Millwall to secure a deserved 2-0 victory at Deepdale.

The Lions were excellent value for their fourth win of the season to move up to fourth in the standings while condemning Preston to another frustrating home Championship reverse.

The hosts have now lost all four of their league fixtures at Deepdale and failed to register a goal.

Bournemouth leapfrogged Bristol City and up into second place courtesy of substitute Arnaut Danjuma's late winner at the Vitality Stadium.

After being introduced off the bench with a quarter of an hour remaining, Danjuma bagged his third goal of the season nine minutes from time as the Cherries maintained their unbeaten start to their league campaign.

The Dutch winger skipped past City defender Zak Vyner after being played in by Dominic Solanke before calmly lifting his shot over the advancing goalkeeper Daniel Bentley as Bournemouth claimed their fourth win of the term. 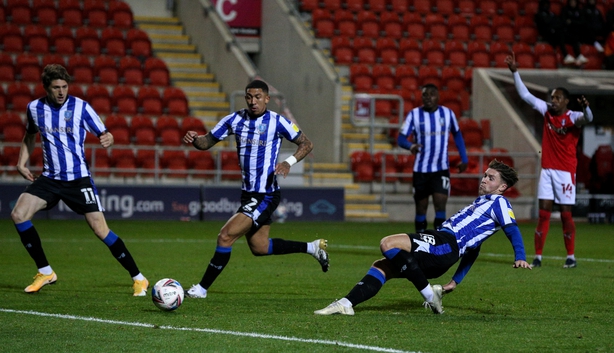 Sheffield Wednesday suffered a third straight league defeat after being defeated 3-0 at Rotherham, who scored all three goals in a peculiar first half.

There was a 10-minute delay when the players were taken off the pitch early on for safety reasons after referee Jarred Gillett was informed there was an unauthorised drone flying above the stadium.

Upon the resumption, the Owls were caught cold as two goals from Jamie Lindsay sandwiched Daniel Barlaser's penalty, awarded after Tom Lees had seen red for hauling down Freddie Ladapo in the area.

Nottingham Forest extended manager Chris Hughton's unbeaten run to four games since taking over this month with a 1-1 draw at Luton.

The visitors had to play the entire second half with just 10 men as well, after Nicholas Ioannou was sent off just before the break for a foul on Martin Cranie.

Despite trailing to Glen Rea's goal, they visitors looked the stronger and fought back to level through Ryan Yates' header to leave with what was a deserved point. 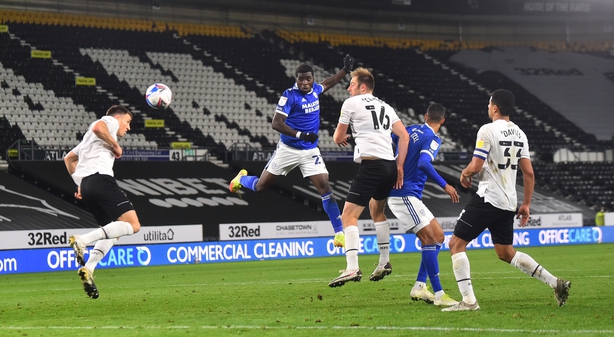 Martyn Waghorn gave Derby a first half lead with another brilliant free-kick but Moore equalised 13 minutes from time.

Moore and Junior Hoilett hit the woodwork for the visitors and Waghorn was denied a second near the end but Derby at least halted a run of five home league defeats.

Lukas Jutkiewicz hit a last-minute winner for Birmingham after they ended their goal drought with a 2-1 victory over Huddersfield at St Andrew's.

Fellow substitute Isaac Mbenza looked like he had rescued a point for Huddersfield after cancelling out the opener from Gary Gardner, who ended Birmingham's barren spell of 322 minutes without a goal.