Dundalk manager Filippo Giovagnoli believes that his side's hectic schedule harmed their chances of starting the Europa League group stage with a win, but admitted that he was too slow in reacting to what was happening on the pitch.

The Lilywhites were beaten 2-1 by Molde in their Europa League Group B clash.

The Louth side started brightly in Tallaght Stadium and took a deserved lead into half-time, courtesy of Sean Murray.

However, the Norwegians up the ante in the second half with a deflected Etzaz Hussain strike and a Ohi Omoijuanfo penalty seeing Erling Moe's escape with the three points.

After controlling the first-half so well, Dundalk were overwhelmed after the break and Giovagnoli took a portion of the blame for that, and admitted that he should have made some changes earlier than he did.

"We’re disappointed but I could have helped the team by making substitutions earlier," he said.

"Molde are a strong team, but I could have done better myself. We lost energy because we have to play a game every three days.

"It’s not the best schedule when you're playing European games against giants of European football.

"If we had games cancelled it would have been great, but that’s not going to happen and somewhere you have to pay the price and we did in the second-half.

"We let them command the game too much and this is what we have to improve on in European games. If you give these teams opportunities, they'll score."

It was somewhat of a baptism of fire for the rookie manager and he has little time to reflect on defeat as the games keep coming thick and fast.

Dundalk play Arsenal in a week’s time but they have a league game before that and that’s where Giovagnoli’s focus is now.

"We have to learn fast and be prepared for the next game which is Waterford on Sunday," he said. "I’m sorry, but I’m not even thinking about Arsenal.

"My priority is Waterford, and qualifying for the Europa League next year. So we have to be strong, keep working hard and try to improve." 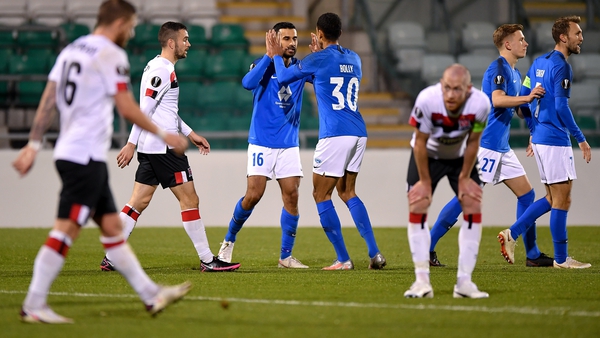