Bristol City remain top of the Championship despite conceding 11 minutes into injury time in their 2-2 draw with Barnsley at Oakwell.

There were 99 minutes between Barnsley's two goals with Michal Helik putting them ahead in the second minute and Cauley Woodrow converting a penalty in the 101st minute.

City had struck twice in four minutes between those two goals with Jack Hunt and Tyreeq Bakinson on target.

Reading also dropped their first points of the season following a goalless draw with Middlesbrough at the Riverside Stadium.

The result means that Reading have conceded just one goal from their opening five league games, a record manager Veljko Paunovic is justifiably satisfied with.

Paunovic said: "I'm never happy when my team doesn't win, but I'm pleased with the mentality of the team. We pushed them to the end and were very close to getting the three points. We put in a fantastic effort and at this point, I think we look very good."

Despite extending their unbeaten start to the Sky Bet Championship season, the Cherries failed to conjure a single shot on target in the 90 minutes.

Tindall, whose side beat Coventry 3-1 before the two-week recess, said: "We were well below the standard that we set against Coventry.

"We didn't create too many chances today which was disappointing. We take the positives. We kept the clean sheet, we're still unbeaten and we're third in the league."

Nottingham Forest picked up their first points of the season as Joe Lolley struck in injury time to give them a 1-0 win against Blackburn Rovers at Ewood Park.

Lolley's effort deflected past Thomas Kaminski with the home side creating little at the other end.

Sheffield Wednesday also recorded a 1-0 win away from home as a Barry Bannan penalty was enough for the win against Birmingham City.

An Ivan Toney brace was enough to seal a 2-0 win for Brentford at home to Coventry City while Stoke won by the same score at Luton, Steven Fletcher and Nick Powell on target early in the second half.

Norwich left it late to claim a 2-1 win against Rotterham at the Aesseal New York Stadium.

Freddie Ladapo put the home side ahead after six minutes but the same player missed a penalty 15 minutes later.

Michael Ihiekwe scored an own goal before Rotterham lost Angus MacDonald to a red card with 19 minutes remaining.

The 10 men looked like they had held out for a point before conceding a last-gasp penalty with Jordan Hugill converting for the visitors.

New Huddersfield head coach Carlos Corberan believes he is finally changing the mentality of his new group of players after two torrid seasons following a 2-1 win at Swansea.

The former Marcello Bielsa protege at Leeds saw his side pick up their first away win since July as they stripped Swansea of their unbeaten record in the Championship this season at the Liberty Stadium.

Harry Toffolo put the Terriers ahead after 23 minutes only for Andre Ayew to level from the penalty spot 10 minutes later. Josh Koroma netted his first goal for Huddersfield midway through the second half to settle the contest.

Millwall also recorded a 2-1 away win against Wycombe as Jed Wallace, from a penalty, and Ryan Leonard scored in the second half after Scott Kashket had given Wycombe the lead in the ninth minute. 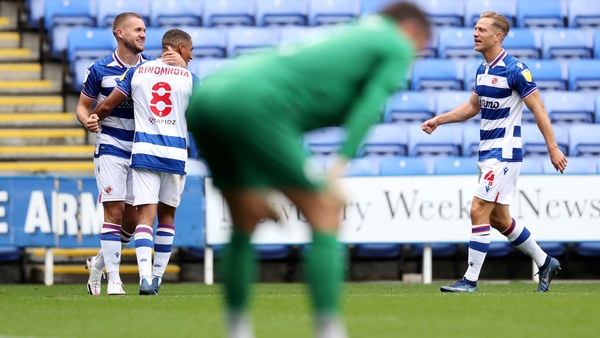