Italy inflicted the Republic of Ireland's second defeat of the Under-21 Euro campaign in Pisa, leaving the Boys in Green likely negotiating their way to next year’s finals as one of the best runners-ups.

Although Covid-19 caused havoc in the Italian ranks, forcing the postponement of Friday’s qualifier in Iceland and a squad overhaul, their two most experienced survivors struck in each half in Pisa to ruin Jim Crawford’s first match at the helm.

Riccardo Sottil, the Fiorentina striker on loan at Cagliari buried the opener two minutes before the break and the forward drafted in on loan from Wolves to replace him, Patrick Cutrone, added the second on 62 minutes.

Italy lead Ireland at the top of Group 1 on goal difference and have next month’s refixed Iceland game in hand.

The Republic also have to face the Icelanders on 12 November in Dublin before they conclude the campaign against bottom side Luxembourg away five days later.

Only the top team is guaranteed to reach next year's finals co-hosted by Hungary and Slovenia, with five of the best runners-ups across the nine groups joining them in a new two-phase tournament.

Ireland were well in a contest against an Italian side stocked with deputies from the Under-20 squad until Sottil struck, getting plenty of joy down the left flank through Zack Elbouzedi.

Michael Obafemi, however, struggled to penetrate Italy’s three man central-defensive unit on his third U21 cap, the first operating in the sole striker’s role. 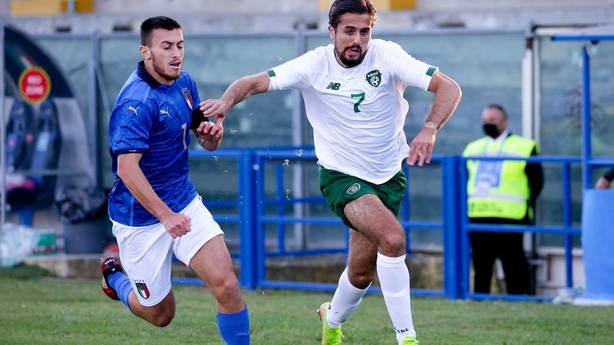 Connor Ronan, who made an explosive impact off the bench when Ireland stunned Sweden 4-1 in their last game all of 11 months ago, slotted into the No 10 role of the injured Troy Parrott and the amount of attention he attracted from the Italians evidenced the threat he posed to the hosts.

Instead, it was fellow attacker Jack Taylor, on his first competitive start, who got most joy early on, dipping a volley just past Michele Cerofolini’s post after eight minutes.

Darragh Leahy’s adventurous drive created that opening and the left-back joined the attack later in the half to deliver a cross that two Ireland team-mates couldn’t get a decisive touch on inside the box.

Neither could Cutrone at the other from Sottil’s deep free-kick that gave Ireland goalkeeper Gavin Bazunu his first real scare.

Shortly before the break, the Manchester City stopper, on loan at Rochdale, would be picking the ball out of the net.

Sottil timed his run perfectly to latch onto a pass down the left channel before cutting inside past captain Conor Masterson and cracking a shot into the far corner.

Needing a spark in the second half, Ireland’s patient approach was easily dealt by the wily Azzurri defence. 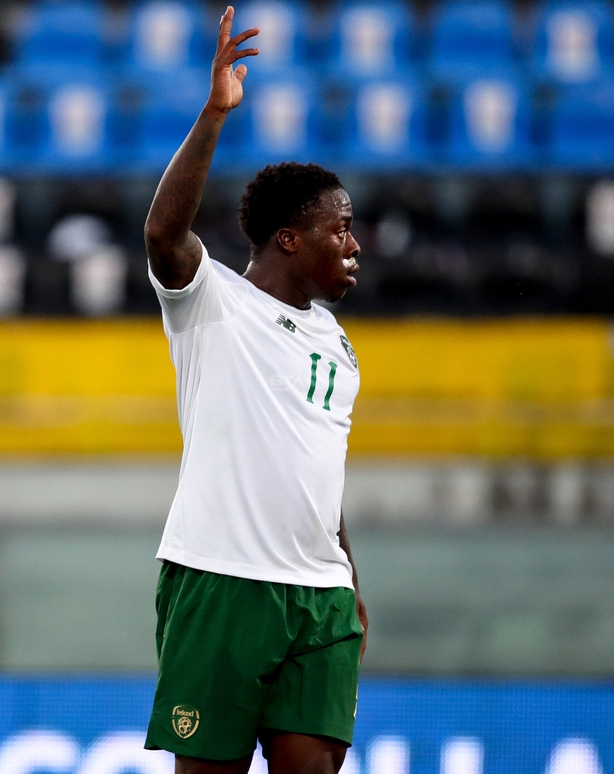 Set-pieces presented their best route to an equaliser, with Nathan Collins just narrowly mistiming his run to connect with Taylor’s free-kick, allowing interval substitute Manolo Portanova to clear the danger.

Samuele Ricci, another of the experienced Italian quartet, overhit his cross moments later as Ireland were again caught square.

They were eventually stretched to lethal effect for the second on 62 minutes.

Once again, Sottil was at his imperious best by playing off his marker’s shoulder to stay onside from a pass out of the Italian half.

Sprinting to the end-line down the right, his crisp delivery across goal enabled Cutrone to nip ahead of Collins to steer the ball home.