John Lennon would have turned 80 this week, and as Ireland come to terms with their Euro exit at the hands of Slovakia, for manager Stephen Kenny, now it's really just a case of starting over.

Instant karma, perhaps, for this Irish team who, judging on their overall results from these past two years, really did not deserve to gain a place at next summer’s tournament, as they were unable to record a victory of any note throughout the Euro qualifiers and the inaugural UEFA Nations League.

For the manager, a footballing working class hero, who worked his way up through the League of Ireland to the top job in the country, it was a shot in the dark, as he had barely a month to prepare properly for the match in Bratislava.

Yet still he was cruelly denied a place in the play-off final as a result of the dreaded penalty shoot-out; a real case of mind games in the Slovakian capital.

Kenny, of course, was meant to take on the role of the senior side once the Euros were completed and only found himself in this position as a result of the Covid crisis.

And while it was the coronavirus that put him in a play-off, it also played its part in his side’s elimination, as two key players missed out of the game as a result of being close contacts to an FAI staff member who tested positive.

That particular story may yet have another twist or two, as the squad and staff were tested again on Friday in line with UEFA protocols ahead of the Wales game, and while results were due on Saturday evening, no update was released by the FAI.

Either way, the manager must plan for the two remaining games of this window without striking duo Arran Connolly and Adam Idah, who have both returned to their clubs – any more positive tests would almost certainly wreak havoc with the Wales and Finland fixtures. 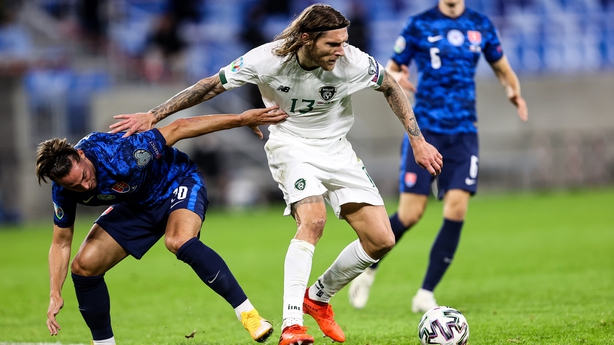 If there are any positives to take from a Euro exit, it would be that the manager now has a sole focus going into the World Cup qualifying campaign, which is the job he was initially brought in to do.

The first three games, and most notably the game in Slovakia, will have silenced some of the doubters who questioned his credentials, while many who would have been unaware of his style or substance ahead of these games would have been impressed with his opening month in the job.

While the Ireland defence is a fairly settled selection, the midfield and forward roles are there for the taking, as the new manager is working off a clean slate in terms of establishing a settled side.

What has emerged over the past three games is real competition for places in the side with more than one option in every position of the midfield and front three.

Players are already showing that they want to play football the Kenny way and appear to be champing at the bit to impress the new man in charge.

And thanks to the format of the Nations League, Ireland get the chance to put their disappointment of defeat behind them straight away as they return to competitive – granted with a small c – action, as they welcome Wales to the Aviva this afternoon.

It will be very hard for Kenny’s side to replicate the energy levels or the performance from Bratislava, however, recent battles with the near neighbours will help get the players up for this one.

Wales beat Ireland twice in the last Nations League campaign – the match in Cardiff being particularly memorable for all the wrong reasons, losing 4-1 – although Ireland did beat Ryan Giggs’ side in the most crucial of their four recent fixtures during the 2018 World Cup qualifying campaign, when James McClean scored the only goal of the game.

Giggs’ side will be surprised, pleasantly perhaps, at this new-look Ireland who will look to win the game the right way against a side who have been playing at a high standard since reaching the Euro 2016 semi-finals, while they have also qualified for Euro 2020.

Kenny will be anxious to create a winning mentality in his side and will hope that the majority of his side have recovered from Thursday night’s endeavours to play against the Welsh. 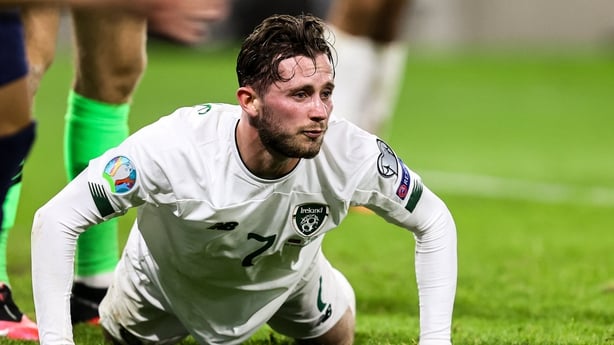 David McGoldrick is definitely out as he has picked up a muscle strain and has returned to his club, while James McCarthy is a doubt, having gone off injured in Slovakia.

The manager said that the scan showed nothing too concerning but if McCarthy is to play again in green this week, it will most likely be in Finland on Wednesday.

There should be a familiar look to the defence with the same group likely to line out, however, the manager may be tempted to have a look at Derrick Williams at left-back or on the left of the central defence, or perhaps Kevin Long.

Midfield should prove interesting in the absence of McCarthy and with Harry Arter still out injured. The manager will probably look to Conor Hourihane to sit alongside Jeff Hendrick, while Alan Browne is likely to get rewarded for his contribution on Thursday night and might be asked to play in an advanced position.

If the manager really wants to change things up, he may opt to throw Jack Byrne into the mix and see how the Shamrock Rovers man fares at international level, however, it is more likely that the Hoops playmaker gets time off the bench in the second half, likewise Jayson Molumby and/or Josh Cullen.

The manager heaped praise on Callum Robinson for his energetic performance in Slovakia, and now in the absence of McGoldrick, it is the opportune moment to give the West Brom front man a turn at leading the line.

Callum O’Dowda, likewise, received the plaudits for his cameo in Bratislava and will probably pick up one of the front three berths, while Robbie Brady may get the other.

The manager will have to decide which of the two to play on the right as both look dangerous coming in off that flank on their left foot.

O’Dowda might be asked to switch out to the left as there appeared to be a really good understanding between Brady and Matt Doherty in the latter stages of Thursday’s play-off.

Shane Long will also expect a bit more time on the pitch in this one and could be the man to replace Robinson for the final 20 or 30 minutes should Ireland need to add some energy into the attack.

Daryl Horgan and Sean Maguire have joined up with their old manager as late replacements, but neither are likely to get a look-in against Wales, as Kenny has a habit of opting for those originally picked in the squad.

Wales come into the game off the back of a 3-0 defeat to England in a friendly encounter and will be far-from full strength arriving at the Aviva.

Gareth Bale, of course, is not with the squad, while Aaron Ramsey looks like he will play, which will be a boost to the side who miss his influence when he is not in the team.

Centre-back Chris Mepham is a doubt through injury, while Joe Rodon, Ben Cabango and Ethan Ampadu will be in contention to play in defence – Ampadu, who really impressed in the 4-1 victory over Ireland in 2018, may start in midfield.

For the Ireland manager, following the last few days of Euro elimination and Covid conundrums, he will be at his happiest once the game kicks off at 2pm.

Kenny’s career as Ireland manager is likely to last at least two years, but he may never have as frantic a few days as he has endured over the past week.

Nobody told him there would be days like these; most peculiar.