Ian Baraclough credited Northern Ireland's homework for their win in Sarajevo as they kept hopes alive of reaching a second successive European Championship by beating Bosnia and Herzegovina on penalties.

Boyce and Conor Washington both scored from the spot, having come into the match as substitutes in the 119th minute with an eye on the shootout.

"We spoke last night about preparing for every eventuality," Baraclough said. "We talked about going into extra-time, we worked on penalties last month and in the last few days as well.

"I think you can see that by the preparation in making the substitutions late on. You’d be kicking yourself if you went out on penalties having not worked on it.

"We knew it was going to be a tight game, we knew it would be the team making the fewest mistakes and that could take their chances. It was a really nervous, tight game."

Northern Ireland started on the back foot with Bosnia pouring forward in the early going, capitalising on a slip from Jonny Evans to take the lead in the 13th minute when Branimir Cipetic pulled the ball back for Rade Krunic to fire in. 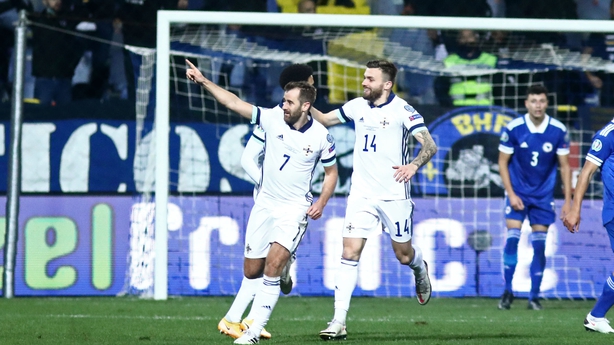 But Northern Ireland were much stronger after the break and levelled when the tenacious Niall McGinn nicked the ball away from Cipetic, beat Sinisa Sanicanin, and then fired past Ibrahim Sehic.

"We knew Bosnia were strong in many areas, it’s not just about Dzeko and Pjanic, it’s the wide areas a swell.

"They played very well tonight and made it difficult for us, but we looked at the team and felt we could put pressure on the defence by getting crosses in and playing down the sides."

The night of Steven Davis' record-breaking 120th cap would go 120 minutes before the two sides were finally separated by the shootout – the first in which Northern Ireland had ever been involved.

Peacock-Farrell had already made a number of saves in open play, but when he kept out Hajradinovic’s spot-kick, momentum swung in Northern Ireland’s favour.

"Going into the penalties, that’s where you’ve got everything to gain as a keeper, you’ve got your opportunity to leave your mark on the game," the Burnley stopper said.

"We’d done a lot of preparation. We had a system, we’d watch their penalties and tried to work out how they were going to shape up.

"A couple of players changed their mind from what we thought they were going to do, but sometimes it’s a mixture of looking at your preparation and gut feeling.

"There are so many factors, not only yourself but also the penalty taker. A shootout is a high-pressure situation, so where’s the most comfortable place to put the penalty? That’s what you’ve got to figure out from the body language, the run-up and their history."