There is pressure on both Sligo Rovers and Derry City going into tonight's SSE Airtricity Premier Division clash at The Showgrounds as they look to ignite fading European hopes, and avoid being dragged into the relegation mire.

The teams suffered frustrating defeats last weekend, with Derry inconceivably conceding two goals in stoppage time against Bohemians on Friday, while Sligo were lethargic in going down to a 1-0 loss in Waterford.

The latter result has left the Blues in pole position to take a potential European spot, but Dundalk’s cramped fixture list could open the door for third place to be in the offing, so there is still lots to play for.

On the flipside, Finn Harps and Cork City moved closer to the sides above them at the weekend and are within touching distance of the Candystripes at least.

The Bit O' Red are are on a run of no goals in three games and just one point, ending their fantastic form since the restart.

This match has been brought forward from mid-October, an international weekend, with Derry expected to have multiple call-ups to the Northern Ireland international team. 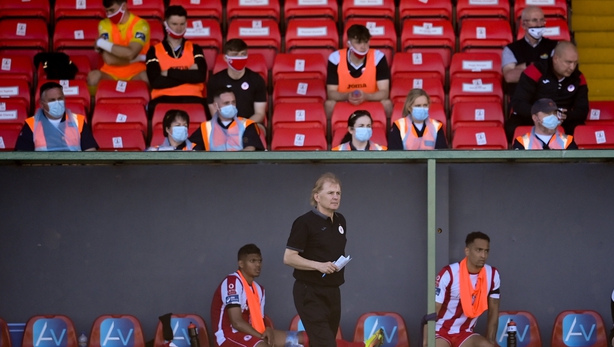 Liam Buckley (Sligo Rovers manager): "I said to the players that we have no time or reason to look back on that game and feel sorry for ourselves. We’ve got five matches to try to win, we’re looking at every game as must-win because of what it can do. You see St Pat’s moving up with one win, how close Derry were to joining them last Friday.

"They would have felt aggrieved with a draw against Bohs so to lose the game must have been tough to take. They were the better side. Both teams will see this game as a chance to be better and get the points.

"We got to keep focused, in this context it doesn’t matter how quick the games get thrown at us. We’ve got five games to get the points we need to take us up the table and we’ll give it our all on Tuesday to do so."

Declan Devine (Derry City manager): "People have been saying how well we’ve played and that’s ok, but the fact is we came out of the match with nothing. We have to be stronger than that.

"I’ve said all along that I have genuine faith in this group of players and the performance was excellent for 90 minutes. We have to build on that.

"We don’t have time to feel sorry for ourselves with three games in a week but the mood is good anyway and having everyone fit again is a great boost.

"There’s still a third of the season to go from here so it’s important we keep moving forward."