Dundalk are facing the prospect of an unbelievable fixture pile-up that will extend into December if they can make it to the Europa League group stages.

The Lilywhites came through a nerve-shredding penalty shootout in Moldova last night to dump out Sheriff Tiraspol and are now just 90 minutes away from making the lucrative group stages.

They will take on KÍ Klaksvik of the Faroe Islands at the Aviva Stadium on Thursday.

A victory would be an obvious lift for the club - financially and in terms of morale - after what's been a tough few months, but it will also present a scheduling problem.

Their league trip to Derry was postponed at the end of August due to international call-ups. That match now takes place on 19 October, three days before a possible Europa League group game.

Presently Dundalk are scheduled to host Waterford on Saturday 24 October but that collision would almost certainly be pushed back to the Sunday if they progress in Europe.

The second round of Europa League group games is down for 29 October. 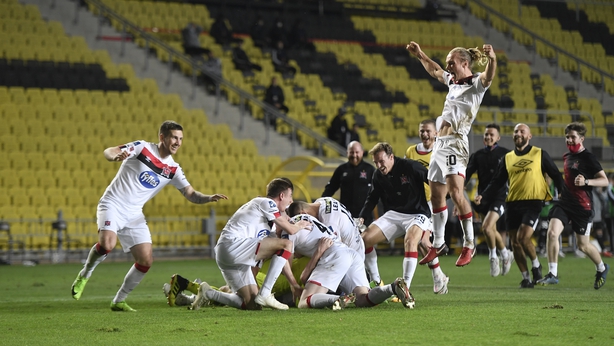 This could see the Lilywhites' final league match of the campaign, against Sligo Rovers, also moved back, to Sunday, 1 November.

Because the final round of league games have to finish at the same time and on the same day, it would mean all fixtures would be moved to the Sunday.

On top of all that, Dundalk's game away to Cork City has yet to be refixed.

That fixture, originally down for Sunday 20 September, was postponed due to Dundalk's progression to the third round of Europa League qualifiers.

When a place in the calendar is found for it, Filippo Giovagnoli could be preparing his team to play nine games in the space of a month.

It's not possible to extend the season because the promotion/relegation play-off is down to be played on the weekend of 8/9 November.

Even after the league campaign culminates things may remain hectic.

Dundalk, who were beaten in last year's FAI Cup final by Shamrock Rovers, travel to Bohs in the quarters of this year's edition.

If they make it back to the decider, they could have two Europa League games and a cup final in the space of seven days.

Meanwhile, the club will welcome 100 fans into Oriel Park for Sunday's visit of Shamrock Rovers, but there will be nobody allowed into the Aviva Stadium for Thursday's huge tie against KÍ Klaksvik.

The club are permitted to allow 100 fans attend the game against the Hoops in line with Government regulations, since Co Louth is in Level 2 of the Covid-19 restrictions.

Since Oriel Park doesn't meet UEFA requirements to host a game at this stage of the competition, Giovagnoli's team are heading for the capital.

"The game is in the Aviva Stadium next Thursday night, a 7.30pm kick-off," the club's chief operating officer Martin Connolly confirmed last night.

"It's going to be a hectic week around Oriel again. It's great. This is what we're in the business for. I'm delighted for everyone involved."