The Gypsies claimed a late win against Sligo Rovers last Friday night, a result which keeps them in the hunt, albeit they need a few teams to do them some favours by taking points off the Hoops from their six remaining games.

Derry arrive to Dalymount off the back of two scoreless draws, against St Patrick's Athletic and Finn Harps. They go to Sligo Rovers on Tuesday and then welcome Waterford to the Ryan McBride Brandywell Stadium on Friday. It's a key seven days for their hopes of breaking into the top four. 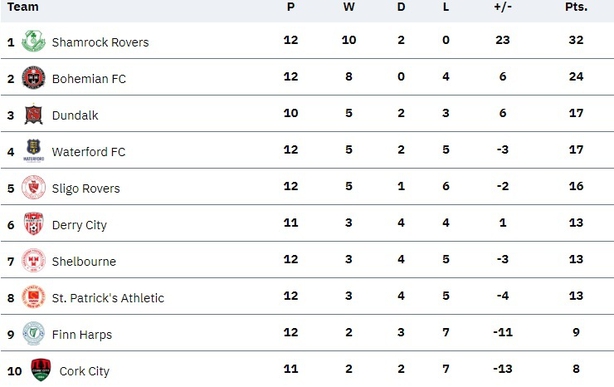 Bohs: The suspended Kris Twardek is unavailable for the hosts.

Keith Long (Bohs): "Derry are unbeaten in their last five games and have added to their squad since they beat us in March. Games between the teams have been very close over the last couple of seasons. With six league games remaining, it's vital we try to continue to pick up points and build on a positive result in Sligo last week."

Declan Devine (Derry City): "Bohs have been excellent this season, but we have to be positive. I want us to try to win the game and this will be a good benchmark for us as to where we're at."