James Tavernier slotted home his 50th Rangers goal after being restored to penalty duties in a rampant 4-0 Europa League win for the Scottish Premiership side over Willem II in the Netherlands.

The Gers skipper was taken off spot-kicks by boss Steven Gerrard last season after failing to convert for the third time in five attempts.

But the Englishman brought up his half-century after stepping back up to slot home the opener against the Dutchmen.

Ryan Kent - who was brought down for the penalty - then prodded home the second before teeing up Filip Helander.

Connor Goldson put the seal on a crushing victory at the Koning Willem II Stadion as Gerrard's team steamrollered their way through to the play-offs.

Ianis Hagi will now face his father Gheorghe's old side Galatasaray when they visit Ibrox next Thursday.

Rangers were awakened in the early hours of the morning when Dutch fans let off a firework display outside their hotel.

But it was Gers who exploded into life as two goals in the space of three first-half minutes lit the fuse to victory.

Allan McGregor was recalled to start ahead of Jon McLaughlin but there was some rustiness from the 38-year-old as he spilled Mike Tresor's strike at Vangelis Pavlidis' feet.

The Greece international could only crash the rebound off the bar and there was another let-off as he fired over again moments later when Tresor turned provider with a cut-back. 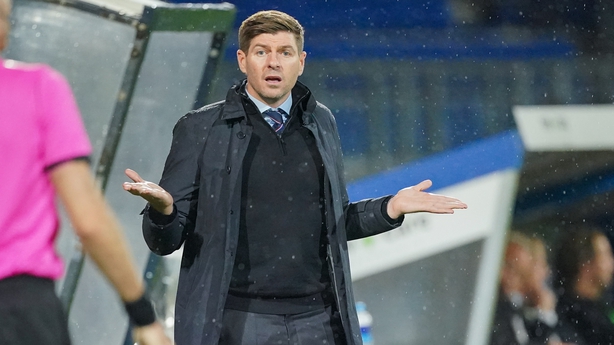 Rangers had not exactly dominated the early exchanges but Willem II made the crucial mistake of standing off Steven Davis after 22 minutes and the Northern Ireland skipper made them pay with a sublime ball over the top for Kent.

Miquel Nelom made it an easy call for Italian referee Maurizio Mariani as he sent the #7million man tumbling with a clip of the heels.

Tavernier had not been trusted to take a penalty since failing to convert in a 2-1 win over Motherwell last October.

But he shook off any lingering spot-kick doubt as he fired down the middle for his fourth goal in five games.

Before the hosts could gather their senses, they were two down as Gers struck again.

Robbin Ruiter should have held a tame Alfredo Morelos strike but let the ball squirm loose and Kent was there in a flash to bundle home again.

McGregor did better 10 minutes before the break as produced an incredible block to deny former Ajax youngster Che Nunnely after his quick exchange with Pavlidis took Helander out of the equation.

He had to be on his toes as Gorkem Saglam flashed in a strike just as the second half got underway.

And Rangers were out of sight by the 55th minute as Helander nodded home the third.

Willem II thought the danger was over as they cleared a Tavernier free-kick but Kent continued to be the Light Blues' tormentor-in-chief as he swung over a perfect ball for the big Swede to thud past Ruiter.

Goldson was not to be outdone by his centre-back partner and added a fourth on 71 minutes as he glanced home from Tavernier's out-swinging corner.

Pavlidis had the ball in the Gers net with 10 minutes left but rightly copped a booking after using an arm to finally beat McGregor following another breathtaking save from the keeper.