Marcus Browne gave his absent boss and 1,000 returning supporters something to cheer as Middlesbrough hit back to claim a 1-1 draw with Bournemouth at the Riverside Stadium.

Watching from his home in Cornwall due to a positive coronavirus test, Neil Warnock saw Dominic Solanke fire the visitors into a 38th-minute lead with a neat back-heel.

But, despite surely bemoaning his side's lack of cutting edge, he will have been cheered by the sight of substitute Browne meeting a Paddy McNair cross to head a deserved equaliser 10 minutes from time.

Boro were one of eight clubs piloting the return of 1,000 fans to their matches this weekend. 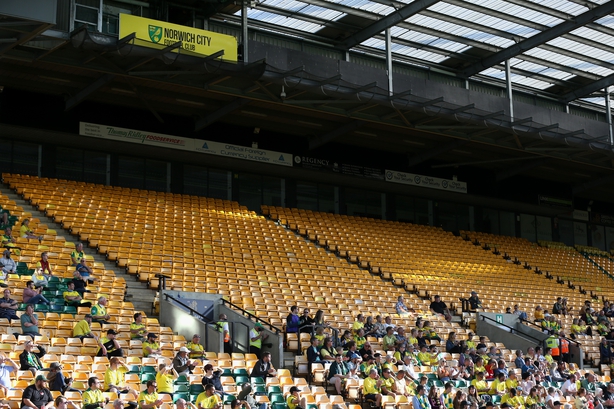 The other team in the Championship was Norwich, who needed an 85th-minute Przemyslaw Placheta leveller to earn a 2-2 draw with Preston at Carrow Road.

Scott Sinclair put Preston ahead in the 14th minute from the penalty spot and Darnell Fisher (42) restored their lead after Teemu Pukki levelled in the 31st minute.

Preston were without striker Jayden Stockley, who is self-isolating due to a member of his family being in contact with someone who has coronavirus symptoms. Republic of Ireland attacker Adam Idah came off the bench on 62 minutes for the Canaries, while Sean Maguire and Alan Browne both started for Preston.

The Wales striker nodded home the opener from a corner in the third minute before sliding in a second five minutes before half-time.

It was a third successive defeat in all competitions this season for Forest - all without scoring - to pile more pressure on Sabri Lamouchi, who is now the favourite to become the first Championship manager to lose his job.

Brentford marked their first league game at their new Brentford Community Stadium with a 3-0 victory over Huddersfield.

Josh Dasilva broke the deadlock in the 58th minute before Marcus Forss and Bryan Mbeumo netted in the closing stages.

Armstrong opened the scoring from the penalty spot in the 16th minute after Tyrhys Dolan was fouled - his third goal in four games.

Ireland defender Derrick Williams made it 4-0 in the 67th minute after Wycombe had been reduced to 10 men, with Darius Charles seeing red 10 minutes earlier before Armstrong (83) claimed his third.

Reading followed up their 2-0 win at Derby by beating nine-man Barnsley by the same scoreline.

Michal Helik was sent off for Barnsley three minutes before half-time and Mads Andersen (68) also saw red a minute after Yakou Meite had given Reading the lead, with Michael Olise (76) wrapping up the points.

Jordan Clark struck an 87th-minute winner as Luton beat Derby 2-1 at Kenilworth Road after Jack Marriott had cancelled out Luke Berry's opener for the home side.

Jed Wallace scored the only goal to help Millwall to a 1-0 victory at Rotherham while the games between Sheffield Wednesday and Watford and Swansea and Birmingham ended goalless.