Stephen Kenny suffered his first loss at Ireland manager on Sunday, yet the new man in charge did not appear too downbeat following the defeat to Finland at the Aviva Stadium.

Despite the competitive nature of the UEFA Nations League, the double header against Bulgaria and Finland was always going to prove experimental, with so many factors at play ahead of the return to international football.

A regime change, very limited time to work with the squad, the players essentially still in pre-season mode, a midweek trip to eastern Europe, two games in three days, and an empty stadium.

Quite a lot to negotiate over the course of the past week, but now that the manager has come through the two matches, got to know his squad and learned what they can do on the pitch, working to a new system, there is a sense that the real work begins now to plan for the trip to Slovakia in a month’s time.

Any manager who changes his entire midfield from one competitive match to the next is obviously thinking about a picture much bigger than the one that was played out at the Aviva Stadium on Sunday.

And while fitness, or lack thereof, dictated at least one, if not all three of those midfield changes, it was always going to be part of Kenny’s plan to see who he will turn to in four weeks’ time.

"We always knew we can’t change everything overnight," said Kenny, speaking at the post match press conference. "We were experimental and we need to see what attacking and midfield options we have for the game against Slovakia."

The manager was not trying to make excuses for the defeat to Finland by drawing on the positives that he took from the game, but he gradually revealed the things that did please him during the game.

He was pleased with bringing some young players into the senior set-up, the way Adam Idah led the line, the way his team adapted to the opposition’s system, which was causing problems in the early stages, he was happy with Harry Arter in the holding midfield role, with Robbie Brady over the two games, and with the chances that his side created. 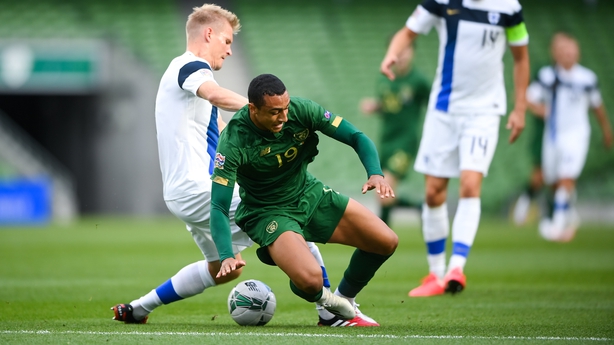 "There has been some really good signs from certain players that merits the idea of blooding players for this and having a look at players with next month in mind," said the manager.

"Adam did better tonight, led the line quite well and he will get better. He has a lot to give and has great attributes.

"It gave me a chance to look at Harry Arter and it gave me a big plus as I thought he played very well in that position as he hasn’t always played that position as a holder, he has only recently learned it at Fulham and I think he did quite well I felt.

"We wanted to have a look at Robbie Brady as well on the left of the three. He has not played that much football but he has been a plus, he came on and did well.

"And in fairness to [Aaron Connolly], he is a danger, there is goals in him and it’s amazing how far he has come in a year. His attitude has been great and that is a credit to him."

Results were always going to be a bonus from the two matches to start the Kenny era, and while the side showed character in the first game to fight back for a late point in Sofia, it was evident that the new manager was also thinking that his side could and maybe should have taken something from the game at the Aviva.

He broke the game down into sections after the game and he felt that Shane Duffy’s late header may have been easier that the one that he scored from in Bulgaria on Thursday.

"For the first 20 minutes it took us a while to adapt to their system, but once we adapted – Enda [Stevens] did brilliantly shuffling across to cut out the wide man - we did well for long spells.

"In the second half, we were forcing errors and getting on top, but then in that period they scored and that knocked us a bit, and then they had a control of the game for a while.

"But we kept going and had chances, but we just didn’t capitalise."

Two games and two identical systems as Ireland were set up in a 4-3-3 formation, however, the manager hinted that he was open to change, whether for the upcoming play-off or for future campaigns.

Key players like Seamus Coleman could not get a game over the two matches as the manager opted to take a good look at Matt Doherty in that position, and he may be thinking about how to get his best players on the pitch for the vital play-off.

"I’m not wedded to anything. We'll review everything and analyse that; I have to wait and see.

"I couldn’t rule anything out, I’m not wedded to one particular system as a manager.

"I try to look at the characteristics of the players and see what will maximise the talent in the team and that is the way that I look to do it."

So on to the Slovakia game, and the manager was not predicting that his side would come through the play-off semi-final, however, he does expect the team to be better, with four more weeks of football under his players’ belts.

"In a month’s time we will be a lot better," said Kenny.

"We’ll only know [if it has come too soon] after the game. It will be a big challenge."