Substitute Ryan Brennan gave Shelbourne their just reward with a late equaliser as the sides had to settle for a point apiece from their SSE Airtricity League Premier Division clash at Tolka Park.

With 50 season ticket holders filling the 200 limit attendance under Covid-19 restrictions, Shelbourne had a purpose to their play from the off, working Peter Cherrie in the Derry goal nine minutes in from a sweeping counterattack.

The winger’s low drive from distance was arrowing into the bottom corner before Cherrie got across at full stretch to push the crisp effort away.

On a very warm evening, Derry had some defending to do once again five minutes later. Farrell flicked on a Georgie Poynton throw-in on the right for Kilduff on the edge of the six yard box. Eoin Toal was ever alert to the danger to block the striker’s shot out for the first corner of the game.

It was 21 minutes before Derry mustered a threat, a speculative long shot from Joe Thomson flying a foot or so over Colin McCabe’s crossbar.

All Shels’ early endeavour was soon undone, though, when Derry’s most incisive attack of the first half delivered the lead on the half hour.

Shelbourne and Derry City share the spoils at Tolka Park.

Newcomer Ibrahim Meite gave the visitors the lead from the spot in the first half pic.twitter.com/GFpKa7PHQd

Colm Horgan got forward from right-back to thread a ball in to the feet of Walter Figueira. His flick found the run of Ibrahim Meite who turned adroitly only to be tripped by the back-tracking Sean Quinn to concede a penalty.

New signing Meite was composure personified from the spot, sending McCabe the wrong way as the ball flew into the bottom corner off his left foot for a goal on his debut.

And the 24-year-old might have doubled Derry’s lead three minutes later but for some frantic defending.

Again it was Figueira who picked out Meite in the area.

And though he cleverly rolled around Dan Byrne, his shot was blocked by the retreating Daniel O’Reilly.

As they did in the first half, Shels started the second on the front foot as they chased the game and were close to levelling on the hour.

Kilduff and substitute Jaza Kabia both had stabs at the ball in a right scramble from a Dayle Rooney corner before Derry cleared.

Cherrie got down well to save from substitute Aaron Dobbs before Shels’ pressure told on 77 minutes.

Brennan met Poynton’s free kick in from the left to power a header to the net.

Ryan Brennan's header on 76 minutes grabbed a point for the hosts pic.twitter.com/XxWX1Wlc4F

Derry did finished strongly with substitute Adam Hamill twice seeing efforts come back off the home crossbar with fine efforts from distance. 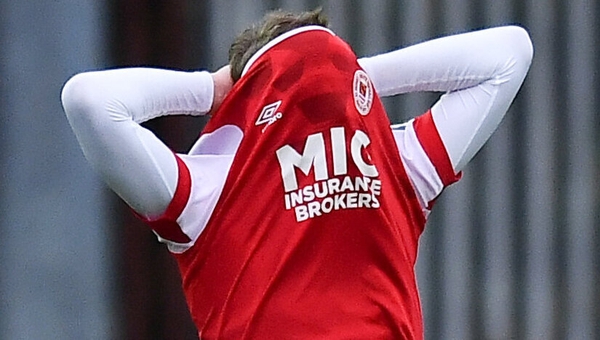