Liverpool manager Jurgen Klopp insisted breaking records is not the club's target this season after a 2-0 victory over Aston Villa took them a step closer to more landmarks.

Sadio Mane's sixth goal in as many games against Villa and a maiden Premier League strike from teenager Curtis Jones, who signed a new five-year contract on Saturday, came in the final quarter of a laboured win for the new champions over their relegation-threatened visitors.

It put them within 11 points of equalling Manchester City's 100-point tally for a season while also bringing up their 17th successive home league win this season and 24th in a row in total.

For Klopp, however, the focus remains only on winning the next game.

"We didn't come here and have the numbers we have because we thought about breaking records. We were always focused 100% on the game and that will not change," he said.

"Hopefully in the future, when the record ends or the season ends, I can start thinking about it.

"I don't even know the numbers - I know we have 89 points but it is not a big thing.

"If we can do something special it is great, but we really don't think too much about it.

"If we want to have record points pretty much we have to win all the games, it's not complicated. The boys know it and it's not necessary to mention it to this group.

"These boys are really fighting for these three points in a difficult game." 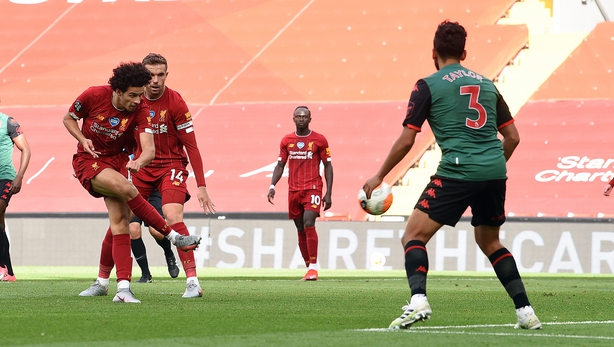 Liverpool struggled for fluency for the second match running since winning their first title in 30 years and Villa had chances to become the first team in the last three years to win a league match at Anfield.

Klopp, who pointed to the strong wind being a significant factor, accepted they were far from their best but was pleased by how his players responded, especially when the introduction of Roberto Firmino, Jordan Henderson and Georginio Wijnaldum meant he could field his strongest line-up for the final 30 minutes.

"Not everyone will be happy I mention it, but the wind made the game really tricky," he added.

"We are not the dominant team in this situation, which is why we had a few problems, but I liked how we stayed in the game and how the boys listened at half-time and in the first drinks break, and I saw the improvement on the pitch.

"When the fresh players came on it was easier for them against a team which was really busy until then."

The Liverpool manager refused, however, to comment on speculation linking him with a transfer move for Bayern Munich midfielder Thiago Alcantara.

"Would you be surprised if I don't give an answer?" he said.

"Thiago is a really good player, like a lot of other players out there I like a lot, but that's all I have to say about it."

Villa boss Dean Smith pointed to the quality in the final third as being the difference in the game.

"Unfortunately we didn't show the quality they showed in the final third for their goals," he said.

"We matched them for long periods, but we never showed the quality in the final third they showed.

"We had good opportunities - a four-versus-two opportunity and a possible penalty shout in the first half.

"We need a bit of quality in the final third but also a bit of luck as well."