On this day 20 years ago world champions France beat Italy 2-1 with a golden goal from substitute David Trezeguet in the final of Euro 2000 in Rotterdam.

The tournament was co-hosted by Belgium and Holland, with the King Baudousin Stadium, formerly the Heysel Stadium, used for the opening match.

Kevin Keegan's England failed to progress from Group A after a shock 3-2 loss to Romania.

France could only finish second in Group D behind Holland, but saw off Spain in the quarter-finals to set up a last four clash with Portugal.

A golden goal was required to send Roger Lemerre's side through with a controversial penalty by Zinedine Zidane putting them into the final to face Italy, who needed a shoot-out to end the hopes of the Dutch.

It looked for long periods like Marco Delvecchio's 55th-minute strike would hand victory to the Italians in the final, but Sylvain Wiltord struck in the third minute of stoppage time to force extra-time, with the prospect of a golden goal deciding the eventual winner.

While Zidane was the main man for Les Bleus, it was Robert Pires who produced a magical run and cross to find fellow substitute Trezeguet in the 103rd-minute and he drilled home to spark wild celebrations for France in Rotterdam.

The victory concluded a remarkable period for the country after they clinched the World Cup on home soil two years earlier in spite of not being fancied in the build-up.

Zidane was at the peak of his powers during this period and despite a red card in France's second group game at World Cup 1998, he bounced back to guide them to glory before he was declared player of the tournament at Euro 2000.

The three-time FIFA World Player of the Year told uefa.com: "I'd say 2000 was one of the best years of my career. Everything I did, I did well." 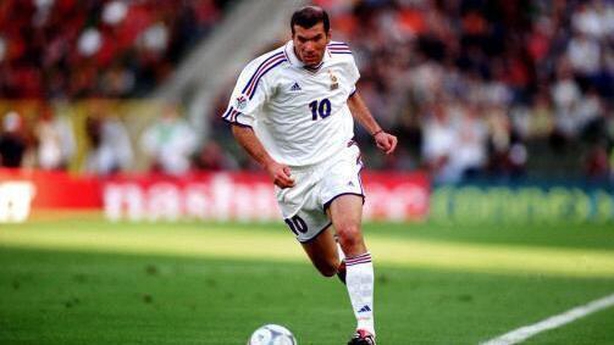 He added: "We felt really confident, but for me the Euro is even harder to win than the World Cup. There are only big teams."

On the final, Zidane said: "We told ourselves if we equalised we'd win. In extra time there'd only be one team on the pitch. That was the case."

Trezequet produced the coup de grace and his strike against Italy was one of two golden goals to decide the winner of the Euro's during its 10-year spell in association football.

FIFA introduced the format in 1993 and it helped Germany beat Czech Republic at Euro 96 after Oliver Bierhoff struck at Wembley.

The rule was initially replaced by the silver goal for the 2002-03 season - although golden goal was used for the final time in the 2003 Women's World Cup - before that was scrapped after Euro 2004.

FIFA then restored its original rules of two straight 15-minute periods of extra time in the event of a drawn game after 90 minutes.