Brentford extended their 100% record since the league's resumption to three matches with Bryan Mbeumo,  Josh Dasilva and Joel Valenciaa ensuring a 3-0 victory at Reading, leaving Fulham sweating on a return to winning ways.

And they struggled again for large swathes of the Loftus Road clash, with QPR hugely unfortunate to wind up empty-handed.

Galway native Ryan Manning struck the bar with a late header, with Marek Rodek beaten all ends up.

Fulham boss Parker will doubtless snatch this result with no questions asked on the night, but with plenty of improvement required in the days and weeks ahead.

Parker's men must still face promotion rivals Nottingham Forest, Cardiff and West Brom in a testing run-in, and the ex-England midfielder will need no explanation of the upsurge in form that is now required.

Leeds extended their lead at the top of the table, but by only one point after being held 1-1 at home against relegation battlers Luton.

Substitute Harry Cornick curled Luton into an early second-half lead and when Stuart Dallas fired Leeds level just after the hour, it appeared there would be only one winner.

But Luton, who climbed off the bottom of the table after Saturday's win at Swansea, withstood a second-half onslaught and gave boss Nathan Jones everything in their fight for survival. 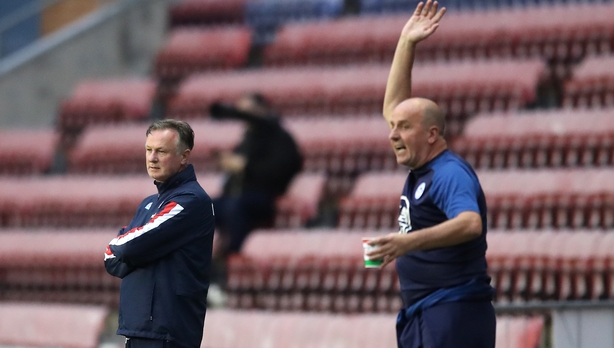 Paul Cook's Wigan made it nine matches unbeaten, and seven clean sheets in a row, with a 3-0 thumping of Michael O'Neill's struggling Stoke.

Wigan themselves have spent most of the season deep in a relegation battle, but their remarkable recent form has lifted them to the lofty heights of 14th, eight points clear of the drop zone.

Despite dominating for pretty much the whole game, Wigan had to wait 40 minutes to open the scoring, through Kieran Dowell.

And after Jamal Lowe was denied by the crossbar shortly after the restart, two more goals inside three minutes from substitute Kal Naismith gave the scoreline a far more accurate look.

Stoke were poor throughout and they threw away the only real chance that came their way early on when Nathan Collins somehow put a free header well wide of David Marshall's goal.

Barnsley boosted their survival hopes with a 2-0 home win over Blackburn.

Conor Chaplin and Jacob Brown got on the scoresheet in the second half, while Rovers had Ben Brereton sent off just before the second goal.

The Tykes are now a point adrift of safety having moved off the bottom to 23rd, swapping places with Luton.

Millwall and Swansea drew 1-1 at the Den, leaving the gap between them and the play-off places at five and four points respectively.

Mason Bennett put the home side in front before an own goal from Lions goalkeeper Bartosz Bialkowski earned Swansea a point.

Cardiff, in sixth, were held to a 0-0 draw at home by Charlton.