Republic of Ireland boss Vera Pauw has said she fully expects to sign a contract extension with the Football Association of Ireland.

The Dutch coach has made an excellent impression since taking the reins last October.

Ireland are top of Group I in their quest to make the European Championships, though they've played a game more than Germany, who they have yet to face.

It was announced at the start of the month that the Women's Euros, originally set to take place in England next summer, have been postponed until 2022 to avoid a clash with the delayed men's event.

Ireland will make history if they get there - the women's team has never made it to a major tournament - and Pauw is determined to keep the momentum going.

"I'm pragmatic with [the contract situation]," said Pauw, speaking to an FAI staff member, who was asking questions on behalf of the media.

"It just needs to be arranged, I've got no worries. It doesn't distract me at all. It's not even in my mind, it will be arranged.

"I look at all the positive feedback that we get from the people in Ireland. I think when that [Germany game, scheduled for 22 September] comes the stadium will be packed because everybody wants to support us in these difficult times.

"I truly have no doubt that the Irish people will come out and support us and maybe be even more fanatic to be there for us.

"The home games are so important. We get such a huge boost form the atmosphere in Tallaght Stadium. It pulls us over difficult moments, it's really something very special."

Pauw also detailed the work ongoing to improve the development of home-based players.

She's been a vocal supporter of the Women's National League and consistently picked players plying their trade on these shores. 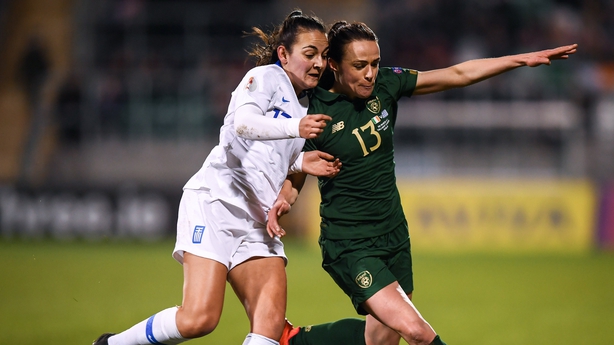 "As you can see from players like Aine O'Gorman, Niamh Farrelly who's now stepping up, Emily Whelan, Jessica Ziu, their development with the support we can give them from the association together with their clubs, they are developing also.

"The nature of top sport is the players want to play at the highest level against the top players of the world. So if they get the chance to go, for example, to England you cannot stop them.

"But me as a coach will not get involved in that.

"Talents are everywhere. The art is to get those talents developed. We all know training twice a week at a club is not enough so we need to do more aside from that club activity.

"The clubs do great jobs, they are the heart of our sport, but to become an international top player, if you play in Ireland you have to do more.

"So training with boys, the home-based training sessions, special individual training programmes... that brings the development of the players to where they are now."