Mikel Arteta insisted he wants the best for Manchester City, even though Arsenal could benefit from his former club's two-year ban from European competition.

Arteta's side moved up to 10th in the Premier League standings on Sunday - six points behind fifth-placed Tottenham - after goals from Pierre-Emerick Aubameyang, Nicolas Pepe, Mesut Ozil and Alexandre Lacazette secured a 4-0 home win over Newcastle to end the Gunners' run of four straight top-flight draws.

Fifth place could now offer a Champions League place following City's UEFA ban for breaching Financial Fair Play rules, although it is yet to officially be confirmed and the champions are appealing.

Asked what he thought about his side potentially benefiting from the ruling, Arteta - who served as City boss Pep Guardiola's assistant from 2016 until taking the Arsenal job almost two months ago - said: "I don't think about it. I just want the best for Manchester City, I really do.

"That is the way I feel, but now I have to do the very best for Arsenal to maximise everything we have here to bring this club as high as possible again."

The Spaniard said he had been in contact with Guardiola, adding: "the admiration and love I have for Pep and his staff and the players, I just want the best for them.

"I know how hard they work and hopefully a positive thing might come for them.

"My first reaction was I was shocked. I got in contact with Pep and the people at the club I know because I know they are suffering."

Arsenal's victory over the Magpies was their second win of 2020, and Arteta urged his side to take confidence from the result.

"It was a satisfying win," he said. "We talked about putting draws into wins and those margins we can improve to translate into more points.

"It was going to be very important after the winter break, first game at home for confidence and getting a result like we did, so I'm very pleased."

Newcastle manager Steve Bruce said the margin of defeat was a "shock" for his side.

"We've given poor goals away," he said. "One thing we've done this season is prided ourselves on not giving much away.

"However we've made a mistake and then we've got punished in the second one, then when you analyse the third and fourth one it becomes a bit of a shock really because no-one really expected it."

He also confirmed that Ireland international Ciaran Clark suffered a "bad" injury during the game. 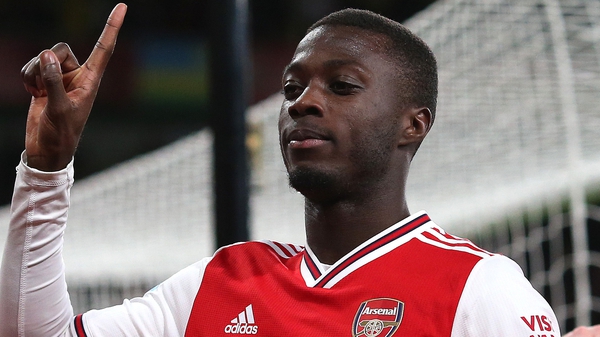