Pep Guardiola denies Manchester City's title defence this season has been a weak one.

The Premier League champions for the past two years currently trail runaway leaders Liverpool by 16 points and manager Guardiola has long since conceded defeat.

Yet the team are still second and last season they became the first side to retain the title in decade.

Guardiola feels that compares more than favourably to other recent winners of the competition.

The former Barcelona boss said: "This team, what they have done in the last two seasons, especially the last one, was incredible.

"I have said many times what happens to the champions of the Premier League when they start to drop points and they cannot get the first (place). What happens with those teams? They fall down, they drop - and we wouldn't.

"In the recent past when Chelsea won the league, the next season, they didn't qualify for the Champions League, Leicester the same and Chelsea again the same. When we won the league we repeated the league.

"But Liverpool are just fantastic, phenomenal, overwhelming. So we have to accept it and learn from that." 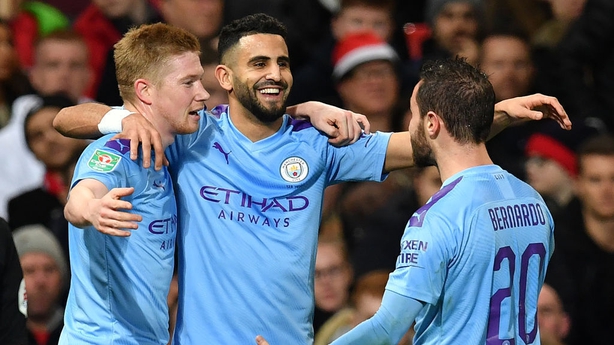 City's focus is now on the domestic cups and the Champions League. They host Fulham in the fourth round of the FA Cup on Sunday before facing Manchester United in the second leg of their Carabao Cup semi-final on Wednesday, leading 3-1 from the first encounter.

The Champions League then resumes with a last-16 trip to Real Madrid next month.

Guardiola has no concerns about the mentality of his players after their title blow.

He said: "We have two games now where we can learn about how you handle the knockout game against Madrid, this kind of situations.

"Every game we have a good argument (to play), a good reason, so why don't we play for that reason?

"We play to be better as a team or as an individual and, in terms of mentality, this team is incredible.

"Honestly, it is one of the best I have ever handled or faced in my career for how they react in the bad moments.

"The numbers, the results, not just in this season, I think are good. Even in the previous seasons I think it was phenomenal. That is why I am so proud."