The Dutchman felt Solskjaer appeared too upbeat in the aftermath of the 2-0 defeat to Arsenal on New Year’s Day which leaves United five points behind fourth-placed Chelsea in the Premier League.

Van Persie said Solskjaer "seems like a really nice guy" but that the Norwegian needed to be more "mean at times" and "more angry" and added: "You need to have fear as well for your coach."

Solskjaer, who is also having to handle fresh speculation surrounding the future of star midfielder Paul Pogba, said Van Persie was not in a position to judge his methods.

"I don’t know Robin and Robin doesn’t know me," he said ahead of his side’s FA Cup third-round tie away to Wolves.

"He probably doesn’t have a right to criticise my management style and I won’t change. That’s definite. Robin took my number 20 (shirt) and that’s probably all he’s going to take from me as well. Because I’m not in medieval times."

The "medieval times" remark was perceived to be Solskjaer defending his man-management methods, which appear far removed from the more autocratic approach of his old United boss Alex Ferguson. 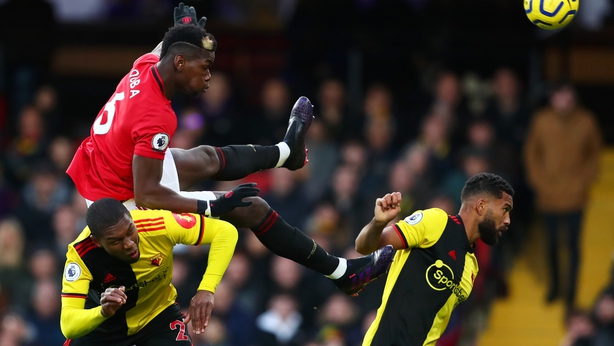 Solskjaer was also asked about criticism of the club in general from Pogba's agent Mino Raiola.

The Italian is reported to have told La Repubblica he would stop sending his clients to United, saying they would "ruin" even a great player.

Coming in the context of a fresh injury setback for Pogba, who will be out for three to four weeks after surgery to remove bone fragments from his ankle, the comments have been interpreted by some as Raiola seeking to engineer a move away from Old Trafford for Pogba.

"I can speak to Paul Pogba about (Raiola’s comments)," the Norwegian said.

"I don’t think I should be talking to agents or about agents that talk about us, but Paul Pogba is our player and agents are hired by players, not the opposite way around. It’s not 'agents’ players’ it’s 'our players.’

"What me and Paul are talking about I don’t have to talk to you about. That will be between us."

Solskjaer insisted the decision for Pogba to undergo surgery on the new ankle injury was fully endorsed by the club, saying that it was simply "bad English" from him on New Year’s Day to say that it was Pogba’s "people" who had been the ones recommending surgery.

Former United defender Rio Ferdinand said on Wednesday that he felt Pogba should make a public statement about his future to set the record straight, but Solskjaer did not feel that was necessary.

"Paul is very committed to coming back, playing well for us, and it’s hard when you’re injured to go and talk about all sorts. I think his talking needs to be when he comes back on the pitch," he said.

"That’s the most important thing, that we get him fit. Get everyone fit, get Scott McTominay back, everyone playing.

"Paul is a top player. He’s a very, very good player that we’ve missed this season, but I think the boys have done really well without him."

United travel to Molineux on Saturday evening to take on the team who knocked them out in last season’s quarter-finals.

The injuries to Pogba and McTominay have severely weakened United in midfield, and Solskjaer admits it puts pressure on Nemanja Matic and Fred.

"You could probably deal with three players rotating, (but) if you’ve got the two fit like we have now with Nemanja and Fred it will be a hard task for them," he added.

"Now Nemanja is in with Scott out and Paul unfortunately not there. We just have to find a way."