Mourinho received a yellow card from referee Mike Dean after the altercation in the second half, where the Portuguese was understood to be annoyed at time-wasting tactics from the Saints.

The Tottenham boss' frustration boiled over after watching his side labour to a poor defeat, as well as losing striker Harry Kane to injury on the south coast, where Danny Ings' first-half goal gave the hosts the points.

Asked about the incident after the game, Mourinho said: "I think the yellow card is fair because I was rude, but I was rude to an idiot.

"And for some reason, I was rude, but I was and because I was I deserve the yellow card."

"I cannot tell anything, I'm so concentrated on my game, I can only look at what I can teach my players," he said.

"I don't want to say anything. I have a very high opinion about this manager - he did so much for football.

"To win against his team is one thing that is interesting me today. It is not easy to play such a strong side." 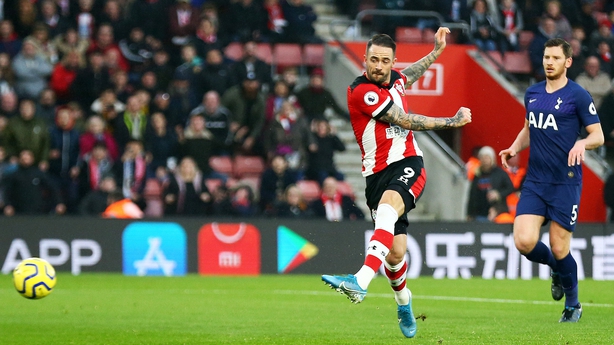 Mourinho was perhaps deflecting from what was a disappointing showing against the Saints as Spurs' top-four hopes suffered another blow.

He also heavily criticised VAR after a possible penalty for a foul on Dele Alli in the first half was not reviewed, while Kane had a goal chalked off for offside in the action where the striker injured himself.

"For me the referees are not the referees," he said. "I think the VAR should change their name because Video Assistant Referee is not true.

"It should be VR - Video Referee - because they are the referees. It is strange. You see the refs on pitch and they not the refs, they are the assistants.

"The other guys in the office are the ones who make the big decisions of the game. In relation to the offsides, we had Harry Kane's goal against Brighton disallowed for offside by I don't know what margin.

"Then Norwich had one ruled out against us. I don't know what half an inch that was. Then today, this one I confess I haven't watched yet.

"What I know is Dele Alli penalty was a penalty and the VAR didn't interfere. He then interfered in a penalty that from 75 yards away I knew was not a penalty.

"It was the Harry Kane with the rebound when McCarthy comes with Dele from 75 yards away I knew it wasn't a penalty.

"But they let the VAR analyse it to try to make us blind about the penalty that was a penalty.

"Sometimes it goes in our favour like at Norwich and sometimes against us. But the direction it is taking us in is really really wrong.

"I think the first step should be to change the name from VAR to VR."

Kane will undergo a scan to check the severity of what Mourinho confirmed was a hamstring injury.

"It is negative...hamstring is always negative. Is it a tear, is it a small thing, is it a contraction? At this moment I cannot say."

"When we lose out target man Harry Kane we know the part of the game where we are normally more dominant is gone.

"We played the last 15 mins of the game without a recognised striker and that made it even more difficult."

Kane was not the only player Spurs lost to injury as record signing Tanguy Ndombele limped off in the first half and it caused Mourinho to lose his patience.

"Of course it is a concern, you think you have a player, you think the player is in an evolution process, he plays very well against Norwich, you think today he is ready for it and he is not ready for it.

"I cannot say much more than that because it is a situation that comes from the beginning of the season."

For all Mourinho's bluster, he overlooked the fact that Southampton deserved to win as Ings continued his fine scoring form with his ninth goal in 10 games.

The Saints have now won five of their last eight Premier League games and are sitting comfortably in mid-table.

"It's a fantastic start to the year - a really intense game," Hassenhuttl added. "Best performance at home so far.

"We were so aggressive, so committed, very difficult to create chances against this team.

"Everyone was doing his best job. We can score always but the key was the work against the ball and the clean sheet. This is the biggest difference from two months ago.

"Ings is in an unbelievable moment when he has a chance he scores, to do what he did today you need a lot of self-confidence and he is full of confidence."