Goalkeeper Bernd Leno's howler had gifted Chelsea an equaliser when Jorginho tapped into an empty net with seven minutes to play.

And then Abraham traded passes with Willian on the break before spinning and firing beyond Leno to complete a battling victory on an afternoon filled with struggle for the visitors.

For the bulk of the match Pierre-Emerick Aubameyang thought his 13th league goal of the campaign would prove sufficient to hand Arteta the dream home debut.

But an embattled Chelsea turned this match on its head late on, just when a sixth defeat in eight league games had appeared likely.

Chelsea boss Frank Lampard will revel in a victory that underscored his confidence to tinker with formations on the fly in the middle of tense clashes.

The Blues were woeful from the off in their 3-4-3 shape, but Lampard dispensed with that formation and withdrew the struggling Emerson Palmieri - and eventually all the alterations paid full dividend.

Chelsea might be struggling for any kind of result at home at the moment, following successive Stamford Bridge losses to Bournemouth and Southampton.

But this was another pivotal win on the road to add to the 2-0 victory at Tottenham on December 22.

Arsenal ripped into a disorganised and disoriented Chelsea from the off. The Gunners pulled the Blues apart at will, with Emerson particularly enduring a torrid time on the left.

Mason Mount should have fared better with a snap shot from a pulled-back free-kick, failing to put enough power on the strike.

But that solitary Blues raid aside it was the hosts who dominated the opening half-hour.

That the home side took the lead came as no surprise. Chambers nodded a corner across goal and Emerson switched off entirely, allowing Aubameyang to ghost behind him and make it 1-0 after 13 minutes. 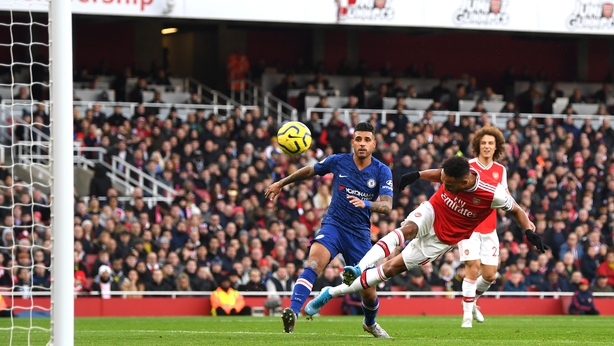 Come the half-hour mark Lampard dispensed with both three at the back and Emerson. Cesar Azpilicueta shifted to left-back and Fikayo Tomori right as Chelsea switched to 4-3-3, with Jorginho replacing the hapless Emerson.

That tactical change yielded something approaching stability for the visitors, though the attack gained precious little intensity.

Kurt Zouma missed at the far post after Azpilicueta's flicked header as the hosts led 1-0 at the break.

Academy graduate right-back Tariq Lamptey replaced Tomori early in the second half, and the 19-year-old immediately warmed to his task.

Lamptey cut in off the flank to thread a fine through ball into the path of Abraham, but the Blues forward was unable to test Leno.

An emboldened Chelsea continued to press though, and first ex-Blues man David Luiz had to blast away Mount's cross before Abraham missed the visitors' best chance of the match, nodding straight at Leno from point-blank range.

Both Arteta and his keeper had their heads in their hands from that clanger, but the misery was only just beginning.

Chelsea broke at pace, with Abraham and Willian linking up before the England striker conjured a decisive finish.