"My guilt is a not a sin of commission, but rather a sin of omission."

Those were the words of outgoing FAI president Donal Conway at Friday's epic FAI accounts release press conference in Abbotstown.

A tough day for the current board of football’s governing body in the country, as they attempted to explain the goings on from the past four or five years, culminating in the disclosure that the FAI currently possess liabilities of more than €55m.

The book of revelations, indeed, as the damning report was eventually published along with the not unusual dramatics, as the FAI website crashed mere minutes after it was published.

A long-time member of the FAI board, Conway had announced earlier in the day that he was set to step down as president at the EGM on 25 January.

Conway, a former school teacher who sat on the board for almost the entire duration of former chief executive John Delaney's time in charge, had previously committed to leaving the role in the summer of 2020.

And the departing president opted to speak in near-biblical verse as he attempted to explain his overall part in what has been a fully fledged fiasco for the FAI.

And while Conway believes his overall legacy will still show the true work that he did for Irish football and will remain largely untarnished once this very slow-moving storm passes, he did accept his own failings throughout the ongoing ordeal.

"My guilt is a not a sin of commission but rather a sin of omission, and that is how I describe my time on the board," said Conway.

"Other than that, I don’t think any of the other work that I have done or been involved in will be destroyed because of that."

This book of numbers may take some time to truly decipher, yet Conway remained defiant and prophesied that judgement day was coming, where further revelations are to be expected.

"When the investigations reach their conclusions, the truth will be out there, and people will know who did what." 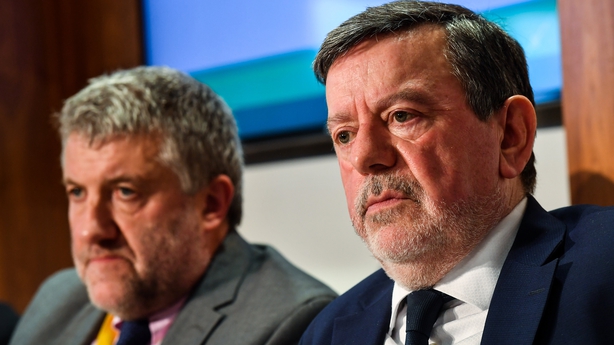 Speaking of numbers, current executive lead and vice president of the FAI Paul Cooke attempted to simplify where things stand in terms of the fragile financials of the association.

"If you want to make it simple, We owe the bank 30 million and then we owe other creditors, exclusive of deferred income, 20 million on top of that, [and then deferred income] of 10 million."

Simplified yet far from simple, as Cooke revealed that the organisation is in the process of refinancing the FAI to secure their future for the next four or five years.

The four horsemen of the apocalypse may well have been circling the FAI headquarters of the Sport Ireland campus in recent years, but now the current board are looking to four guardian angels to take the organisation out of darkness and into the light.

The renewal of government funding appears to be high on the list of current objectives and the board revealed that they were effectively working through a list of requirements in order to restore the much-needed cash injection.

"Many weeks ago, Sport Ireland laid out the conditions for the restoration of funding," the assembled media were told.

"It is important that the association can move forward and an important signal of that will be the arrival of the four independent directors.

"The instillation of the independent directors is a really key condition to bring about the restoration of funding.

"Today [release of accounts] is a condition, the KOSI report was a condition, the publication of our accounts, the adoption of the accounts at the AGM, these are all built into the conditions as outlined for the resumption of funding."

However, Minister for Sport Shane Ross sounded defiant when commenting on the scale of the debt that exists at the FAI, stating that the government would not be pouring money down a black hole.

It remains to be seen whether the latest move by the board, with the resignation of Conway, is enough to satisfy the government as to the overall make-up of the FAI’s controlling group, but the minister did offer some hope in relation to the restoration of the funding.

"What I would say is that the government is very keen to resume the €2.9m funding which we have withdrawn because we want to see football supported," Ross told RTÉ.

Looking to the future, Cooke would neither deny nor confirm that he is interested in the association’s top job when asked at the press conference.

"I’m continuing as executive lead until the new chair comes in," said Cooke.

"I envisage going back as vice-president when the interim chair comes in. A lot of things can happen between now and then."

On a brighter note, the board do not believe that their hosting of Euro 2020 next summer in Dublin will be affected as a result of their on-going financial issues.

"The Euro 2020 is UEFA, the FAI, and our partners like the Dublin City Council and the Government itself.

"The Dublin County Council and the Government are contracted and are spending the support spend that they have committed to.

"UEFA, as they do with every host city, provide the money to cover costs, so there is no danger whatsoever to any arrangements around Euro 2020, that proceeds exactly as it would have."

The FAI did, of course, lose the future sponsorship of mobile provider Three, who announced that they would end their association when their current deal runs out next year, and it emerged that discussions for a new deal had recently taken place.

"We had moved on with discussions but there was no deal signed.

One further question posed asked whether any further shocks were expected within the association in relation to sponsors pulling out.

"Is this rock bottom?" another pondered.

"I think so," conceded Cooke, who also admitted that he was shocked by the severity of the levels of debt within the association.

"But today is a day that we can move forward," he added.