Liverpool manager Jurgen Klopp is wary Everton will view the Merseyside derby as the game which can "solve a lot of problems" for beleaguered manager Marco Silva.

Victory at Anfield - however unlikely considering better teams than the current crop have unsuccessfully come and gone since Kevin Campbell's winning goal in 1999 - would buy Silva and the Toffees board some much-needed time with the club currently two points above the relegation zone.

Liverpool have lost just three of the last 39 Premier League meetings, all at Goodison Park, and are unbeaten in the last 17 meetings in total, not to mention they have not fallen to a home league defeat by anyone since Crystal Palace in April 2017.

But Klopp, who has won five and drawn three of his eight derbies in charge, believes a win at Anfield could be the 'silver bullet' Everton are hoping for.

"Remember we don't have to speak about quality and quality differences," said the German, who admits he "didn't run through my living room celebrating" when his side were drawn against Everton in the third round of the FA Cup.

"Are we in a better moment in the table? Of course, that is obvious.

"But the stats, from my point of view, help Everton more than us because they want to strike back. They want do show they can do differently. They can solve a lot of problems in one game.

"It is a very important football game for us but that must be enough for us." 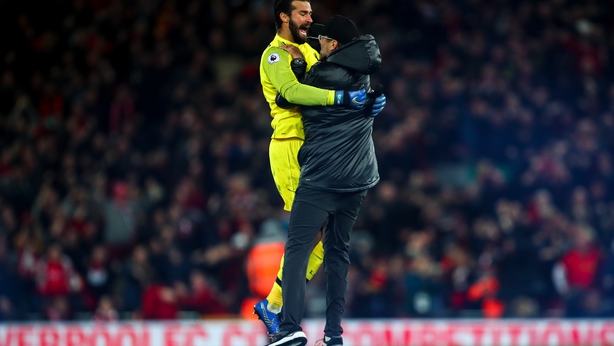 Everton's current run of two wins in 10 league matches has put Silva in a precarious position and has the air of a 'dead man walking' since losing to fellow strugglers Norwich two weekends ago.

"Of course I have sympathy because I know how difficult the life of a manager can be," Klopp added.

"But the last thing Marco needs now is that I feel sorry for him - I don't. But I am really on his side because I know about the job."

Last year's fixture at Anfield was a memorable one for Liverpool fans with Divock Origi scoring a 96th-minute winner after Everton goalkeeper Jordan Pickford's error, prompting Klopp to run 50 yards onto the pitch to celebrate with goalkeeper Alisson, who is suspended having been sent off against Brighton at the weekend.

The Liverpool boss was fined £8,000 for his incursion and has no intention of repeating it.

"Everton were good that night, it was an intense game and there were a few winning moments before finally there was a strange goal and my celebration, which I said sorry for," he said.

"It will not happen again - not even in a derby - but in that moment it was a pretty cool moment.

"That was a year ago so it has nothing to do with tomorrow night and we have to be focused on the important parts of the game and they are on the pitch."

Meanwhile, Everton forward Richarlison has extended his contract at Goodison Park until the summer of 2024.

The Brazilian, who joined from Watford in July 2018, scored his 20th Everton goal in 50 starts against Leicester on Sunday.

"I intend to be here a long time," Richarlison, 22, told evertontv.

"This was the club which gave me the opportunity to show my football.

"It was here I managed to get a place in the Brazil national team and it was here I have scored lots of goals in the Premier League."