Messi struck 54 goals for club and country in the 2018-19 season, and found the net nine times in seven games in October and November.

"Ten years ago I received my first Ballon d'Or, guided by my three brothers," Messi told the audience. "Today I receive my sixth, guided by my wife and children."

?? When your dad became the 2019 Ballon d'Or ! #ballondor pic.twitter.com/E1WMm0fkCT

Rapinoe won the women's Ballon d'Or award after leading the United States to a record-extending fourth World Cup title in France this year.

The 34-year-old midfielder, the standout player at the June-July tournament, succeeded Norway's Ada Hegerberg who did not take part in the World Cup. 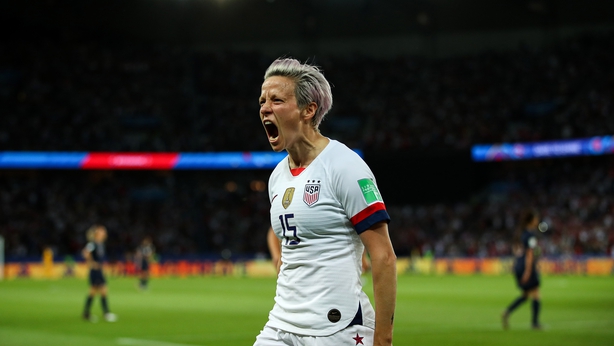 Rapinoe was not present at the ceremony to collect soccer's most prestigious individual accolade in the Theatre du Chatelet, where the show 'An American In Paris' is on.

"I'm so sad I can't make it tonight. It's absolutely incredible congrats to the other nominees. I can't believe I'm the one winning in this field, it's been an incredible year," Rapinoe said in a recorded message.

"I want to thank my team mates and the U.S. federation."

Dutchman Matthijs de Ligt, a key player in Ajax Amsterdam's thrilling run to the Champions League semi-finals and now at Juventus, won the Kopa trophy for the best Under-21 male player in the world following a vote of international journalists.

Alisson Becker, one of four Liverpool players in the top seven for the men's Ballon d'Or, was awarded the new Yashin trophy for the best male goalkeeper of the year.