Pep Guardiola has no intention of moving Fernandinho back into the Manchester City midfield.

The Brazilian has been playing as a centre-back in recent months.

That situation first came about through necessity with Aymeric Laporte and John Stones out injured but has endured even with the latter now fit again.

City boss Guardiola concedes pairing Stones with Nicolas Otamendi is not a combination he likes.

The pair - who are currently the club's only fit senior specialist central defenders - have not started together since a calamitous loss to Norwich in September.

The champions have now fallen 11 points behind Premier League leaders Liverpool, with Fernandinho's absence from midfield cited as an issue by critics.

Yet Guardiola has no intention of moving the 34-year-old back into his preferred role.

Asked why Stones and Otamendi are not trusted together, Guardiola said: "Because I like 'Dinho playing in that position a lot. Right now, yes (I prefer him as a defender). That is why he plays."

Asked about the midfield, he added: "I prefer (Ilkay) Gundogan and Rodri in this position."

After failing to keep a clean sheet in seven games in all competitions, however, Guardiola accepts his team needed to tighten up at the back. 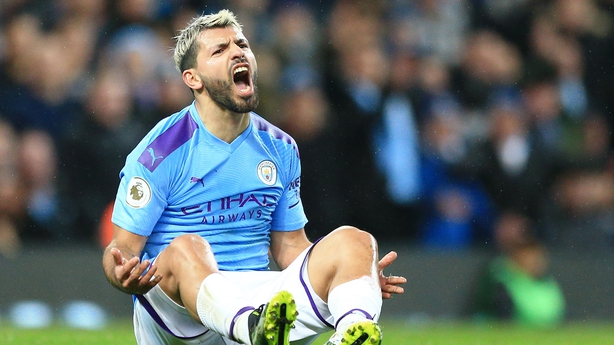 Gundogan will miss Tuesday's clash at Burnley through suspension and record goalscorer Sergio Aguero (above) remains on the sidelines with a thigh injury.

Speaking at a press conference to preview the trip to Turf Moor, Guardiola confirmed that the striker will also miss Saturday's clash against Manchester United.

"He is not ready for the derby but after the derby we will see," Guardiola said.

City suffered another blow to their hopes of winning a third successive title as they were held to a 2-2 draw at Newcastle last Saturday.

Yet Guardiola is determined to fight on and recognises the importance of claiming victory against a tough Burnley side.

He said: "They have to believe we will win tomorrow. That is the fact. In the situation we are we cannot think about the people who are in front.

"We have to think about what we have to do to win the games and play quite similar to recent games, especially like Newcastle and, except for 20-25 minutes, against Chelsea. We played good.

"We try to have the chances that we have and concede few, to be more solid in this department and improve.

"It is always difficult for all teams (at Burnley). What they do they do perfectly. We need to adapt to their style and play our way."

City might not be fully firing but Burnley boss Dyche is under no illusions about the challenge in front of his side.

"At that level, that real sharp edge of trying to win the league, trying to win in Europe, two or three injuries, the tiny details affect a way a team operates," he said.

"They've still got top players coming in, so I'm not sitting here crying on their behalf, but when you're at the super-elite level and the expectation is massive then the team loses key players, it affects the balance.