A defiant Pep Guardiola insists confidence is not a problem with his Manchester City players after seeing them surrender two more precious Premier League points at Newcastle.

City led twice at St James' Park, but on both occasions were pegged back as they were held to a 2-2 draw, in the process allowing Liverpool to increase their lead over his side at the top of the table to 11 points.

They have won only once in five games in all competitions, but Guardiola is adamant that confidence is not an issue.

He said: "You have to see how the players run and how they fight and how they try to do it, the body language - we never give up, so the team is always there, that's my feeling. 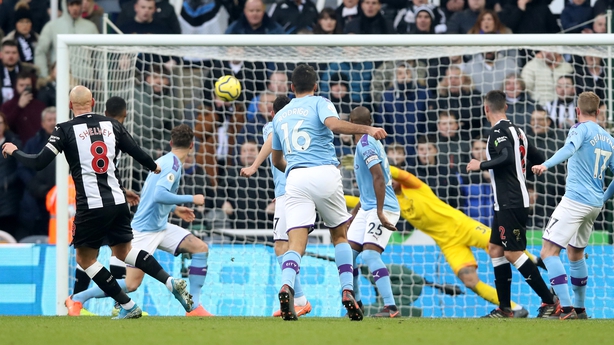 City, who lost 2-1 on Tyneside last season, produced a much better display this time around, yet were still unable to make it count.

They were ahead with 22 minutes gone when Raheem Sterling blasted home from close range, but surrendered their advantage just three minutes later, Jetro Willems firing past Ederson to ensure it was level at the break.

It remained that way until eight minutes from time when Kevin De Bruyne controlled a clearance on his chest before dispatching the ball with real venom off the underside of the crossbar, only for Jonjo Shelvey to snatch victory from their grasp with an equally sumptuous finish.

Guardiola said: "My feeling is the day was good, I think we played well. It's not like last season when we were here when we played not well. We scored the first goal after one minute and after, forgot to attack.

"The game is what it is. In my opinion, it was good. We played well with the ball, we were solid, we conceded few counter-attacks, but football is how many goals you score and how you don't concede.

"You accept that. Sometimes it happens."

City have a chance to redeem themselves at Burnley on Tuesday evening before arch rivals Manchester United head for the Etihad Stadium next Saturday, all the while knowing further slip-ups could be fatally damaging.

However, Guardiola is looking no further ahead than Turf Moor.

He said: "I'm not thinking about how many games we have to win. It's just try to win the next one.

"Last season when we were here, we were not talking about the Premier League, how many games you have to win.

"It's not about that. It's just now recover, prepare and try to win against Burnley, that is what you have to do, and after that the derby and make these steps."