Liam Brady believes the return to fitness of forward David McGoldrick has greatly increased the Republic of Ireland's prospects of beating Denmark in tonight's Euro 2020 qualifying showdown in Dublin.

Ireland need a win against a side they have failed to beat in five meetings over the last two years or the Nations League play-offs beckon. The Danes require only a point to secure their place at the Euros.

Mick McCarthy's men have scored just six goals in their seven qualifiers to date but were missing Sheffield United striker McGoldrick due to injury for last month's 0-0 draw in Georgia and 2-0 loss in Geneva.

"We were only beaten once in the seven matches but six goals with Gibraltar and Georgia in the group tells you everything. We're really struggling.

"But David McGoldrick coming back into the side, he's a player who can hold the ball up, he's got flair. He's not the quickest but he's skilful and strong, and able to bring people into it.

"If we're going to win, I can see it being only 1-0. With McGoldrick in the side we've got a chance." 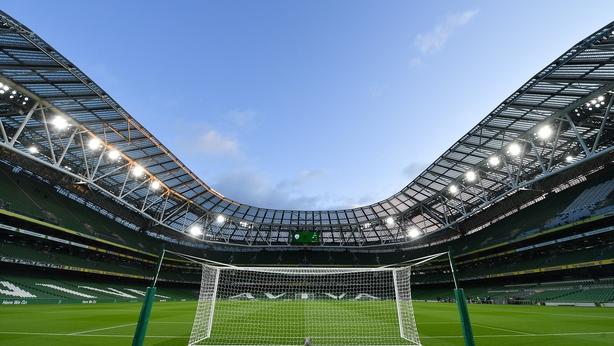 Dublin is one of 12 host cities for next year's tournament - three group games and a last-16 tie will take place at the Aviva Stadium.

Brady thinks missing out on the competition would be disastrous, both in terms of the missed opportunity to play at least two major tournament matches at home for the first time, and the financial implications for the cash-strapped FAI.

"For us to miss out on it would be a terrible blow and would be a devastating blow for the FAI. They really need this injection of finance."

Brady admits that Ireland will not start as favourites but he believes they are in with a fighting chance.

"I think we can do it tonight but we have to be absolutely at our best. Our concentration has to be at its best.

"We can't let the likes of Christian Eriksen and Yussuf Poulsen, who is very dangerous coming into the box late, have any space or time.

"We'll probably have our best chance of scoring from a set-piece, from the likes of Shane Duffy, John Egan or McGoldrick, if we get the right delivery.

"It can be done. We're up against it, they're a fine side, but we've got this chance and we might as well gave it our best go and see where we are at the end of the 90 minutes."