Celtic winger James Forrest has signed a new four-year deal at the club.

The 28-year-old, a Scotland international, will now remain at Parkhead until at least the summer of 2023.

Forrest, having joined the Hoops as a nine-year old, has made 369 appearances and scored 81 goals.

He has won eight Premiership titles, five Scottish Cups and four League Cups during his time at the club.

Meanwhil, Celtic and Lazio have been charged by UEFA over "illicit chants" heard during their Europa League match last week.

In addition, the Scottish champions have been charged over the display of an "illicit banner" during the game, which the Hoops came from behind to win 2-1. 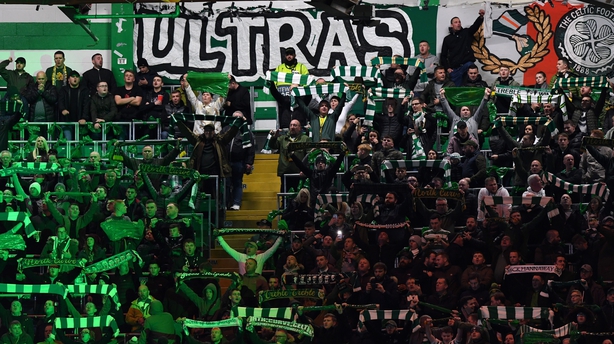 European football's governing body announced the disciplinary proceedings on Wednesday afternoon.
It is the third time this season Celtic have been charged by UEFA.

They were fined £10,400 earlier this month for letting off fireworks during their game against Cluj, and £11,000 for using flares and throwing missiles during their clash with AIK in August.

UEFA's control, ethics and disciplinary body will announce any prospective sanctions at its next meeting on November 21.

Follow both FAI Cup finals this Sunday via our live blog on RTÉ.ie/sport and the News Now app, or watch exclusive live coverage on RTÉ2 and worldwide on the RTÉ Player from 11.45am. Live national radio commentary of Dundalk v Shamrock Rovers on RTÉ Radio 1's Sunday Sport.