Messi became the first player to score in 15 consecutive seasons of the competition by putting the visitors ahead inside three minutes.

Czech champions Slavia deservedly levelled through Jan Boril early in the second half but Barca secured a sixth successive win in all competitions thanks to a fortuitous own goal from Peter Olayinka.

Borussia Dortmund surrendered first place in the group to Barca following their 2-0 loss to Inter Milan.

Benfica beat Lyon in the other game in that group, with Pizzi claiming an 86th-minute winner after Memphis Depay cancelled out Rafa Silva's early opener.

Michy Batshuayi came off the bench to score a dramatic late winner as Chelsea boosted their chances of reaching the Champions League knockout stages with a 1-0 win over Ajax in Amsterdam.

Striker Batshuayi, on in place of Tammy Abraham, emphatically smashed home via the underside of the crossbar four minutes from time following a pass from fellow substitute Christian Pulisic.

Victory at the Johan Cruyff Arena was a sixth in succession in all competitions for Frank Lampard's Blues and moved them level on six points with their hosts at the top of Group H.

Ajax thought they had taken a 35th-minute lead but Quincy Promes' close-range finish was disallowed for a marginal offside call following a VAR review, while Edson Alvarez headed against a post during a frustrating night for the Dutch champions.

Valencia were prevented from joining Chelsea and Ajax on six points by a late equaliser in the 1-1 draw at Lille.

Jonathan Ikone struck five minutes into stoppage time for the French side after Valencia went ahead through Denis Cheryshev and later had Mouctar Diakhaby sent off for two bookable offences. 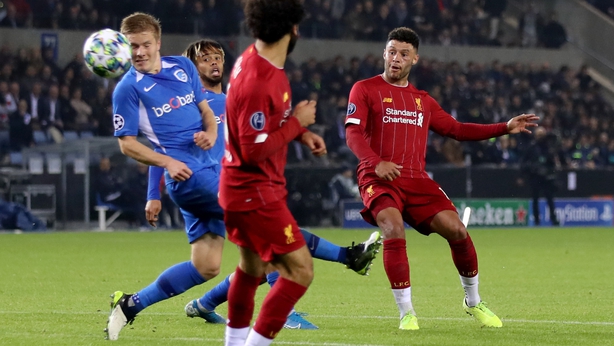 In Belgium, Liverpool midfielder Alex Oxlade-Chamberlain announced his return to the Champions League after an 18-month absence with two goals in a 4-1 win in Genk.

The England international missed all but 20 minutes of last season with a serious knee injury sustained in the semi-final win over Roma in this competition in April 2018.

Dries Mertens overtook Diego Maradona to become the second highest goalscorer in the Italian club's history with a brace in Austria.

Lorenzo Insigne claimed the winner for Carlo Ancelotti's side, with exciting 19-year-old Erling Haaland's brace not enough for the hosts.