The opening round of the Extra.ie FAI Cup did not produce a noteworthy upset but further chances will come as the second stage gets underway on Friday night.

Finn Harps were the only top-flight side to be eliminated against high-flying Shamrock Rovers, and it leaves some big names in this round.

Remarkably, just two all-Premier Division ties emerged from the draw but they bring with them several talking points.

Derry City and Dundalk were paired together in what will be a major examination of the Lilywhites' hold on the trophy – and a potential treble this year.

The Candystripes saw their European hopes take a knock last week in losing to Shamrock Rovers and with this tie, and another clash with Vinny Perth’s side to come in the EA SPORTS Cup final next month, their promising season is about to come to a head.

Georgie Kelly scored the only goal of the game to give @DundalkFC the win over @CobhRamblersFC in the FAI Cup. #rtesoccer pic.twitter.com/hQcC2LIN1V

Cameron Dummigan is a doubt for Dundalk as he is struggling with an ankle injury, while Robbie Benson is back in training but may not make the squad. Otherwise, Perth has a full panel to choose from.

"It's a huge game," said Dundalk midfielder Chris Shields. "Derry have a great prestige with the FAI Cup. It’s a real sentimental trophy to them, and with us being the holders, we want to get to a final again. You can’t beat walking out in the Aviva on the first weekend in November and playing in front of that crowd.

"It’s going to be a hugely difficult game on Friday, so we’ve got to knuckle down now, recover well, do our homework and go up to Derry and hopefully win.

"But we’re confident. We’ve scored eleven goals in two games and the boys in front of me make it look so easy. It’s really free-flowing at the moment. Our confidence is sky high, the group is really together and that will only push us on further and further throughout the year."

For Derry, David Parkhouse misses out through suspension, while Junior Ogedi-Uzokwe is struggling with an injury and remains a doubt ahead of the game.

"They're a superb side; arguably the best in the history of this league," said Candystripes manager Declan Divine.

"But what I really like about them is their humility. It doesn’t matter how successful they are or what trophies they win- they just get ready to go again. That’s the mark of true champions.

"That said, while we will give them the respect they deserve, we have to concentrate on getting through the tie and into the next round."

UCD’s record 10-1 defeat to Bohemians ended the very successful reign of Collie O’Neill – a move that drew surprise in many quarters.

Maciej Tarnogrodzki – last seen at senior level when caretaker at Bray Wanderers – is now in charge and he has the unenviable task of trying to claw back Harps in the league and upsetting St Patrick’s Athletic tonight. 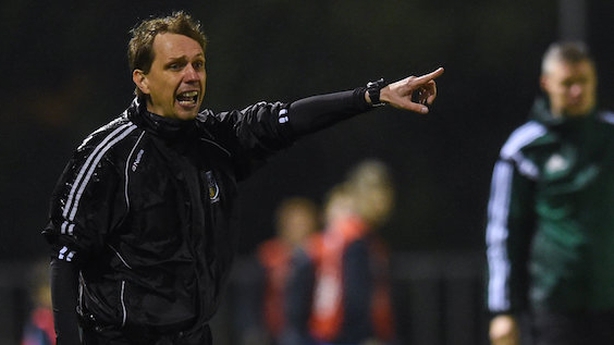 The Saints, despite struggling throughout the season, are firmly back in the race for a Europa League spot and they will fancy their chances against the reeling UCD.

St Patrick's Athletic came from behind to beat Sligo Rovers in Richmond Park last Friday. Glen McAuley and Dave Webster scored for the Saints after Romeo Parkes had given Sligo the lead. pic.twitter.com/sgxZ4PRxwD

Saints boss Harry Kenny will be without Republic of Ireland Under-21 international Jamie Lennon through injury, while Mikey Drennan remains suspended. Ciaran Kelly and Conor Clifford, however, return from their respective bans.

"We have had two wins against UCD already this season, but that being said, we know that they were both games that we had to work really hard for," said Kenny.

"They have brought in Maciej Tarnogrodzki as manager this week and he’ll be looking for a reaction and performance from the players.  It’s a home tie for them so we know that with it being the cup, they will be looking at it as a one off with nothing to lose so we really need to be at it."

UCD must plan without goalkeeper Conor Kearns who is serving a suspension.

Galway United's league season has long been over in terms of having something to play for and the visit of a big name like Cork City is a golden opportunity to get a big crowd in Eamonn Deacy Park.

City were on the verge of elimination against Cabinteely until Ronan Hurley struck in the 119th minute of the tie at Stradbrook.

The Premier Division side went on to win on penalties and securing three points against Waterford last week has eased their relegation fears.

.@CorkCityFC were pushed all the way but they managed to get the better of @Cabinteely_FC after penalties in the FAI Cup. #rtesoccer pic.twitter.com/FUeIqawUCY

Vinny Faherty returns to contention for Galway following an injury that ruled him out of last week's win away to Cabinteely. Iarfhlaith Davoren and Andrew Peters are both doubtful ahead of the game.

"We've got confidence from the last two performances and wins but we know we're up against a different challenge when we face Cork City."

For Cork, Conor McCormack misses out through suspension, while Cian Bargary and Cian Murphy are still sidelined through injury. Other than that, City have a full squad to choose from.

And speaking ahead of the game, City caretaker boss John Cotter is expecting a real challenge from the First Division outfit.

"It'll be a tough game, no doubt," said Cotter. "They’ll cause us a few problems, but it’s how you approach the game too. It’ll be a tough game no doubt, but hopefully the attitude will be right and we’ll perform well and get to the quarter finals."

Shamrock Rovers, seeking a first win in the competition in 32 years, welcome the side that knocked them out last season to Tallaght Stadium.

United are still chasing down Shelbourne in the First Division and will have a play-off to come shortly at worst – this is a free hit but only Dundalk and Bohemians have won at the Dublin venue this season.

Drogheda manager Tim Clancy looks set to again plan without midfielder Mark Hughes, with the cup tie coming too early for the midfielder who has returned to training after an injury layoff.

"I think it will be geared into them this year, that if they aren’t at it, they could possibly lose the game," said Clancy. "But you can’t draw too many comparisons from last year.

"It’s a completely different scenario for us. We are up against something you certainly won’t face in the First Division but we are looking forward to it."

Rovers are without Neil Farrugia (hamstring) and Joey O'Brien (ankle). Boss Stephen Bradley is taking nothing for granted. "They're definitely a better side than they were last year," he said. "It will be a tough game."

Across the city, another promotion-seeking outfit, Longford Town, come up against Bohemians at Dalymount Park.

The Gypsies look to be over their recent blip thanks to a dramatic win over Shelbourne in the last round and notching double figures in the league in the follow-up match.

Goalkeeper James Talbot is back from suspension, while Luker Wade-Slater and Andy Lyons also come back into the fold after hamstring injuries.

All the goals from Dalymount Park as Bohemians remarkably hit double figures against UCD in a merciless display pic.twitter.com/VLLPRM8TR4

Town boss Neale Fenn has been linked with the Cork job and there are unconfirmed rumours that he has left his position at the club, so it remains to be seen who will be in charge in the dug-out at Dalymount.

On Saturday, Inishowen League outfit Glengad United have a special day to look forward to as they host Waterford FC.

The game will be played in Maginn Park in Buncrana, giving Waterford an 840km round trip.

Glengad beat St Michael’s of Tipperary in the last round and this is a major step up.

A junior team from Donegal has never gone beyond this stage.

Sligo Rovers will host Limerick in The Showgrounds. Both sides have little to play for in league action – Tommy Barrett’s outfit have dipped dramatically in recent weeks but edged by Cobh Wanderers in the last round.

Sligo hit Glebe North for eight in their tie and will expect a stiffer task in this game.

Finally, on Sunday, it’s the battle of the two remaining non-league sides from Dublin who managed to be paried together.

Crumlin United, packed with League of Ireland experience, welcome Lucan United to CBS Captain's Road, with the away side boosted by the major signing of Dave Mooney this week following a decade in the English game.

A quarter-final spot is at stake for the winner.