Pep Guardiola had no complaints about the decision but bemoaned a lack of consistency after VAR denied Manchester City a last-gasp winner against Tottenham.

The Premier League champions had to settle for a 2-2 draw at the Etihad Stadium after Gabriel Jesus' injury-time strike was disallowed on review for a handball by Aymeric Laporte.

Under this season's clarified handball rules, the decision was correct. However, Guardiola has not forgotten that Spurs' Fernando Llorente was awarded a goal against City despite it hitting his arm in the Champions League last season.

City boss Guardiola said: "If it's hands it's hands but why was (it) not hands with Llorente last season and why is it hands today?

"But always we have to live with the decision in these situations. It is what it is, accept it. It will make us stronger.

"We played better today than the second best team in Europe. When people say you can do better - better than this I don't know if it is possible. 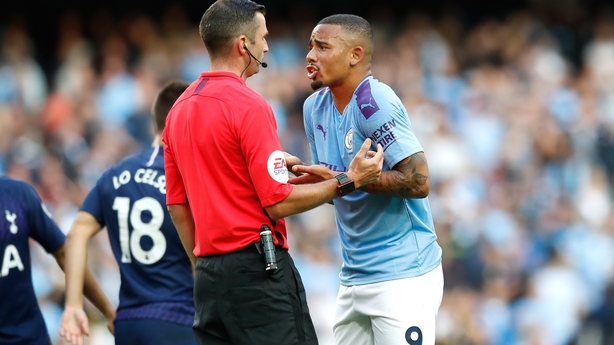 "We conceded just two shots on target against this team, with the quality they have. We created a lot to score goals. We played incredibly, (one of) the best games in our time together. We were so good.

"Unfortunately we could not win but we will prepare for the next. It is just the beginning."

City twice led with Kevin De Bruyne crossing for Raheem Sterling and Sergio Aguero to score but Erik Lamela and Lucas Moura both levelled for Spurs.

The other main talking point from the game was an incident between Guardiola and Aguero on the touchline after the Argentinian was substituted in the 66th minute.

Guardiola angrily shouted at the player about something but the pair were later seen hugging.

"He believes that I was upset with him for the goal we conceded," said Guardiola. "I am sometimes exaggerated on the touchline but few times am I upset with the players.

"I was a football player, I know what it is like to be in there. It is part of the game - emotions. We talked after and during, and that's all. He is a guy I like. I love him a lot."

With that in mind, Spurs boss Mauricio Pochettino was pleased with the result, although he suggested the continuing uncertainty over Christian Eriksen's future was affecting the team.

Playmaker Eriksen, who made his first start of the season in the game, continues to be linked with a move away from the London club before the European transfer window closes.

Pochettino said: "I think they were better. I think they dominated the game. That was so clear.

"Of course I am happy with the result. It was a very positive result for us, one point here.

"The way we fought - I am so happy, but at the same time I am critical because we need to improve a lot.

"The team and squad is still unsettled. We will need to wait until after the transfer window in Europe closes to see which players we are going to have and that is not easy." 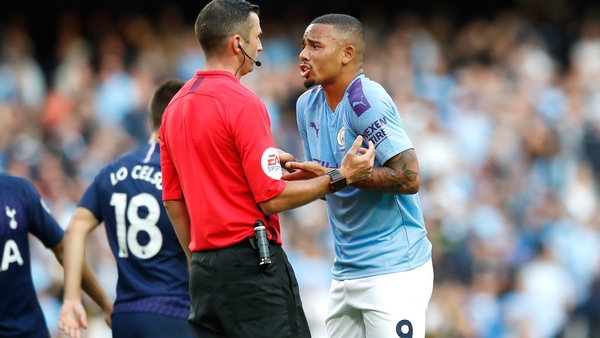 Deja VAR for City as Spurs escape with a point Soccer